USC stifles OSU 61-48, while Metu exhilarates us all 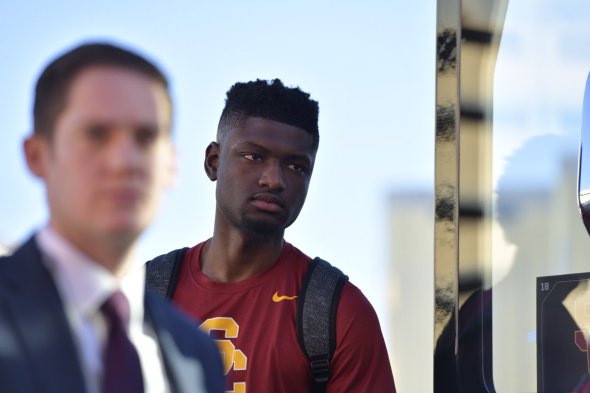 LAS VEGAS – Chimezie Metu, early in the second half, backed into Oregon State’s Zach Reichle. He took a jab step, glided into the lane and soared. How exactly does he keep his 6-foot-11, 225-pound body in the air for so long?

While in the air, bittersweet sentiments start to bubble. Remember how skinny, how lanky he was his freshman year? What a difference three years makes.

As blissful as this moment is for the USC basketball faithful, the potential of this moment can’t drown out the disappointment of this year. I stress to you, dear reader, to treasure each moment of this young man, an athletic and academic all Pac-12 unfortunately known outside these parts for dong punches and other mercurial behavior.

At the apex of his jump, he finally flicks his wrist, and the ball barely touches the net. Keep in mind, two former Los Angeles greats are watching him.

Of course, Bill Walton is one. The other? Magic Johnson. Chimezie Metu skyhooked in front of Magic, people.

USC 37, OSU 24 with 14:31 to go@Chimezie_Metu gets to 10 points after some sweet second half buckets! Watch on @Pac12Network.#ItTakesATeam pic.twitter.com/0pk7WA7aSp

Did he know he was there? “No,” he said. “These two young men,” Andy Enfield said, pointing to Metu and Jordan McLaughlin, “are so important to us. We want to keep our season going so we can play with guys like that a little longer.”

.@Chimezie_Metu is a man of the people. He stopped by to 🏀🖊️ for some youngsters following Thursday’s win by @USC_Hoops. #Pac12Hoops pic.twitter.com/ieKLOjV8po

In between, Metu thunderously swatted shots and generally made life miserable for the Oregon State frontcourt.

The actual game was a bit of a sludge. USC pulled away from the Beavers 61-48 to advance to the Pac-12 Tournament semifinals.

Jonah Matthews notched 10 points in the first half to pace a 29-19 lead into the break. He and McLaughlin both finished with 13 each. With the defense submitting their best defensive performance of the year, Metu, Matthews and McLaughlin were enough to win.

USC held Oregon State to 0.77 points a possession, 31 percent shooting and forced double-digits turnovers. It took Wayne Tinkle’s team 24 minutes to crack 20 points. It was the first sub-50 point game for the defense since the opener against Cal State Fullerton. His son Tres, who leads the team with 17 points a game, sputtered to eight points on 13 shots with a gimpy leg.

It’s fair to point this out, for sure. This night, however, unequivocally belonged to Super-Mezie. His final stat line: 22 points on 10 of 15 shooting, 11 boards and two blocks.

From the other end of The Strip!@itsmclaughlin11 throws an insane alley-oop to @Chimezie_Metu!

USC entered the night the last team in on Jerry Palm’s bracket. The biggest positive of the night is obviously not absorbing a crippling loss to the Beavers, who are outside the Top-100 on RPI.

Another plus is Notre Dame’s loss to Duke. The Irish are couldn’t close a potentially big win that wouldn’t trumped anything on the Trojans’. Speaking of which…

USC’s biggest win per RPI is Middle Tennessee State, who lost to Southern Missisissippi in the Conference USA quarterfinals. Southern Miss is a bottom-200 team that will sink MTSU’s RPI, and consequentially, probably USC’s.

In addition to the number problems, MTSU is actually higher than USC in RPI, NCSOS and several other metrics the committee will use. They did fall just behind USC on Ken Pomeroy, for what it’s worth. If USC loses to Utah or Oregon, both teams will be sweating on Selection Sunday.

The Trojans are moving on!

NOTE: Shout-out to Frank Cruz on Twitter, who rightly corrected an error. This article is corrected to no longer indicate that Metu was a three-star.