Steve Alford might need to sneak into the tournament just to keep his job. (Getty Images)

LOS ANGELES – UCLA is like James McAvoy in the movie Split.

You never know what personality is coming next.

One night, the Bruins might travel to the Bayou and take down then-No. 7 Kentucky (now No. 21). Another week, they’ll let middling teams in Colorado and Oregon State push them around.

At 15-7 and fourth in the conference, and fresh off cruising by Stanford by 16, they seem to be wearing their best face.

Just in time for the Trojans’ visit to Pauley Pavilion.

If USC expects to survive game one, it’s resurgent defense needs to prove its mettle against the conference’s No. 1 offense.

The triggerman for the explosive Bruins outfit is junior guard Aaron Holiday.

He scores 19 points a game, leading the team and good for No. 5 in the Pac-12. In 10 conference games, he’s topped 20 points in seven of them. While not a great at twos, he hits a scorching 41 percent of his threes.

He lives at the charity stripe, forcing six fouls a game.

Basically, you play him too close and he’ll force a foul, and you better not sag off in response. 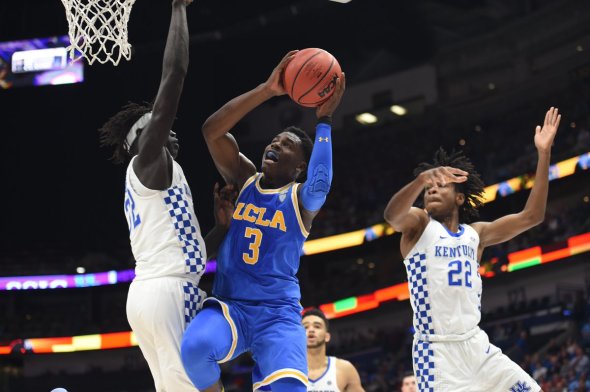 Jordan McLaughlin draws the matchup, and he has to continue driving the trend of USC’s backcourt forcing giveaways. Holiday will get his points, but he turns the ball over 21 percent of his possessions.

He crippled UCLA’s rhythm with six turnovers in the Colorado loss and seven more in a 78-69 overtime loss at Michigan.

While the rest of the Bruins protect the rock, the Trojans’ No. 1 turnover defense in conference needs to take advantage.

The most versatile Bruin is former McDonald’s All-American Kris Wilkes. At 6-foot-8, the freshman wing chips in 13.8 points and 5.3 boards a contest. He shoots a respectable 35 percent beyond the arc. He’s got the athleticism for aggressive man-to-man defense.

Bruins fans are waiting for consistency to meet the potential.

In a post on Bruins Nation titled “How to Fix UCLA Basketball,” the writer bemoaned Wilkes’ usage on the nation’s No. 112 adjusted defense per Ken Pomeroy.

“Kris Wilkes,” he wrote, “is very good and is a better athlete than whoever he plays…he has the size and strength to cover a four and the quickness to cover a guard.”

He is perhaps the perfect embodiment of UCLA’s schizophrenia. He struggled mightily against Michigan’s Charles Matthews, ceding 20 points while sitting for large stretches with three fouls. Two weeks later, he battled with the uber athletes John Calipari collects at Kentucky, leading the way with 20 points of his own.

Guards Jaylen Hands and Prince Ali – mighty is he – form the rest of the backcourt. They serve similar functions, averaging 11 and 10 points, respectively. Hands dishes the ball better with three assists per game, while Ali provides more of a scoring spark, connecting on 43 percent of his threes.

The biggest obstacle for the USC defense is 7-foot stretch big Thomas Welsh. While 12.6 points a game isn’t incredibly imposing, USC doesn’t have a great track record against most big men this year. 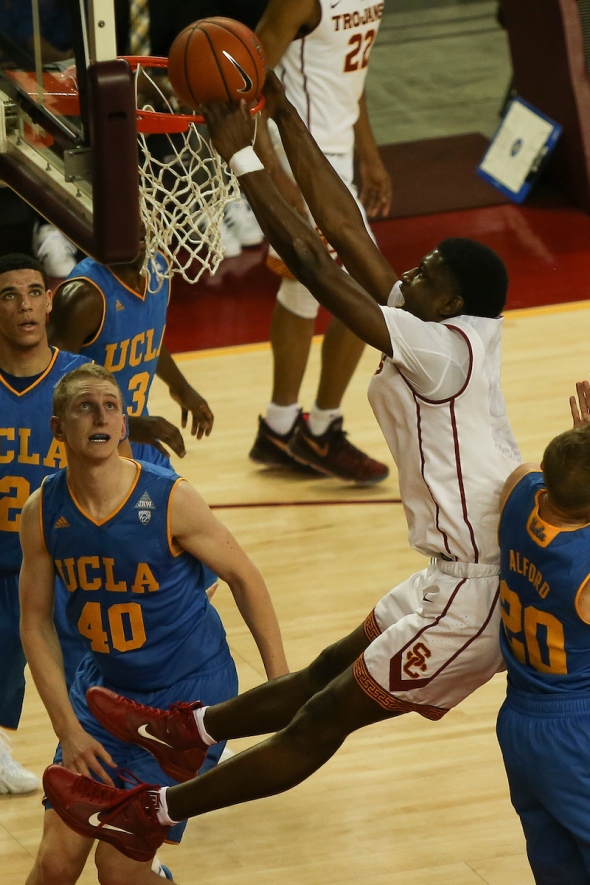 Metu needs to replicate this. Welsh isn’t the strongest big man, so the 6-foot-11 triad needs to push him around. (Galen Central)

He gobbles up almost 11 caroms a game, and balances inside scoring with 39 percent shooting from three. Mobile bigs like Tres Tinkle of Oregon State and Stanford’s Michael Humphrey have found traction against the USC front court, and Welsh fits the description.

With Bennie Boatwright out last weekend against Cal, Chimezie Metu and Nick Rakocevic alternated good and bad moments against Marcus Lee. With Holiday forcing fouls on his drives, and Welsh filling in for big villain of the week, Boatwright’s foot needs to be ready to go.

If he is fully healthy, either he or Metu get to victimize GG Goloman and Alex Oleshinski. Both are foul machines, committing five each per 40 minutes. Metu can take advantage with his physicality.

If Boatwright finds himself attached to Welsh, he can take a page out of Michigan forward Moe Wagner’s book. Both forwards love the three ball, and Wagner victimized Welsh for 23 points on three of five shooting from deep.

One last factor in the Trojans’ favor: they will maximize possessions. To translate, USC should be able to combine elite offensive rebounding with its newfound turnover defense to get as many possessions, and thus extra chances at points, as possible.

We talked about the defense already, but Rakocevic stands at No. 6 in the nation in offensive boards. Metu and Boatwright both rank nationally here, as well, and should offset Welsh’s presence.

Right now, Ken Pomeroy predicts an 81-79 victory for the Bruins, but with only 57 percent certainty. It’s very close to a toss-up.

This is by far the biggest test for the defense to date. Utah and Oregon provided competent offenses over the last six games, but the bevy of sharpshooters complementing Welsh offers a wholly different challenge.

Couple that with a UCLA team now well outside the tournament picture, and Steve Alford should have his young team foaming at the mouth in a raucous atmosphere.

Andy Enfield, however, fields a team with a clear identity since the Washington game. Over eight of the last nine games, you see a consistency driven by chips on cardinal and gold shoulders.

You can’t truly know which UCLA team will show up Saturday.

Are we ready to trust the Trojans?

USC fumbles away too many chances, falls 82-79 in Westwood »
« Dodge: USC needs to sweep UCLA to rise in L.A. basketball hierarchy