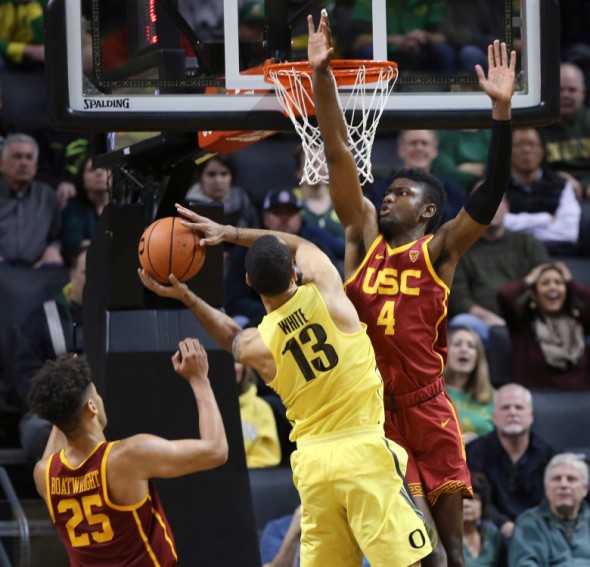 It took six ties, 14 lead changes and clutch free throws down the stretch from senior captain Jordan McLaughlin for the Trojans to finally put away Oregon 75-70 at Matthew Knight Arena.

For the entire USC program, it ended 14 games of misery against the Ducks, as Andy Enfield recorded his first victory over future Hall-of-Famer Dana Altman. Overall, they improved to 14-6 and 5-2 in the conference – still a half-game behind Stanford and Arizona for first-place.

Maligned for his interior defense for much of the year, Metu has been a different animal defensively since Stanford’s Reid Travis bullied the frontcourt in Palo Alto.

Metu challenged reckless Oregon drives twice in the first five minutes, which prevented a one for nine start from the field from truly punishing USC. Boatwright and Metu contributed three deflections between them by the second media timeout.

With the defense locking down early, Boatwright and Jonah Matthews got comfortable. Matthews knocked down a couple smooth jumpers to finish with 10 points in the half, and Boatwright took advantage of some switches to draw matchups with smaller guards.

He bashed his way to 12 points in the initial frame, and finished with 18 with four threes. Matthews cooled after the start to end up with 11.

Up 10 with 11:43 left in the half, USC seemed on the verge of a cruising. Dana Altman snapped at his team, and they responded with 52 percent shooting on several hard looks to cut the lead to 36-35 at the half.

Behind 18 points from the 6-foot-2 Payton Pritchard, Oregon’s smaller guards made everything over the Trojans’ long backcourt trio of Jordan Usher, Shaqquan Aaron and Elijah Stewart.

The second half turned into a battle of haymakers, as both teams traded leads the rest of the way. When Oregon forced a couple of turnovers in a row, assistant coach Jason Hart had a meltdown of his own to get USC angry again.

Jason Hart was too close to the announcer mics, so they muted the whole audio. Must’ve said something salty after the two turnovers. #USCvsOU

Down 49-45, Metu and Boatwright responded to the call, seizing the lead behind two Metu free throws and a Boatwright trey.

With five minutes to go, USC found themselves down 65-61. Before that, the starting guards of McLaughlin and Stewart combined for only four points. While the frontcourt carried the team most of the way, the backcourt made the crucial final push.

Stewart canned his two free throws to slash the deficit in half, and McLaughlin dished a beautiful feed to Metu for a short hook to retake the lead 66-65.

Metu, for all his defensive prowess, tied Boatwright for the team lead in points with 18 on 11 shots.

This was a game that proved the newfound resolve of Enfield’s team, proving they could win in different ways. After weeks of gobbling up turnovers, Oregon only coughed it up 12 times. Most of the time, these didn’t lead to transition points, which denied USC easy points.

McLaughlin, surprisingly, led in rebounding with nine boards, including a offensive board that led to an and-one opportunity.

He also finished with seven assists, now tops in the conference in the category.

Tonight was a swing game for the rest of the season. USC entered with decent wins over Colorado and Utah, but needed a road feather in their cap to make the resume more substantial.

They got exactly that, and barring a surprise loss in Corvallis on Saturday, should go into next week’s home stand against Stanford and Cal with a chance at first in the conference.

Hold serve at home, and the team on the brink after Washington goes into UCLA 17-6 and off the NCAA tournament bubble.

For a team that endured a boatload of injuries in the non-conference, and a controversial suspension of arguably its best player…

Man, what a turnaround.