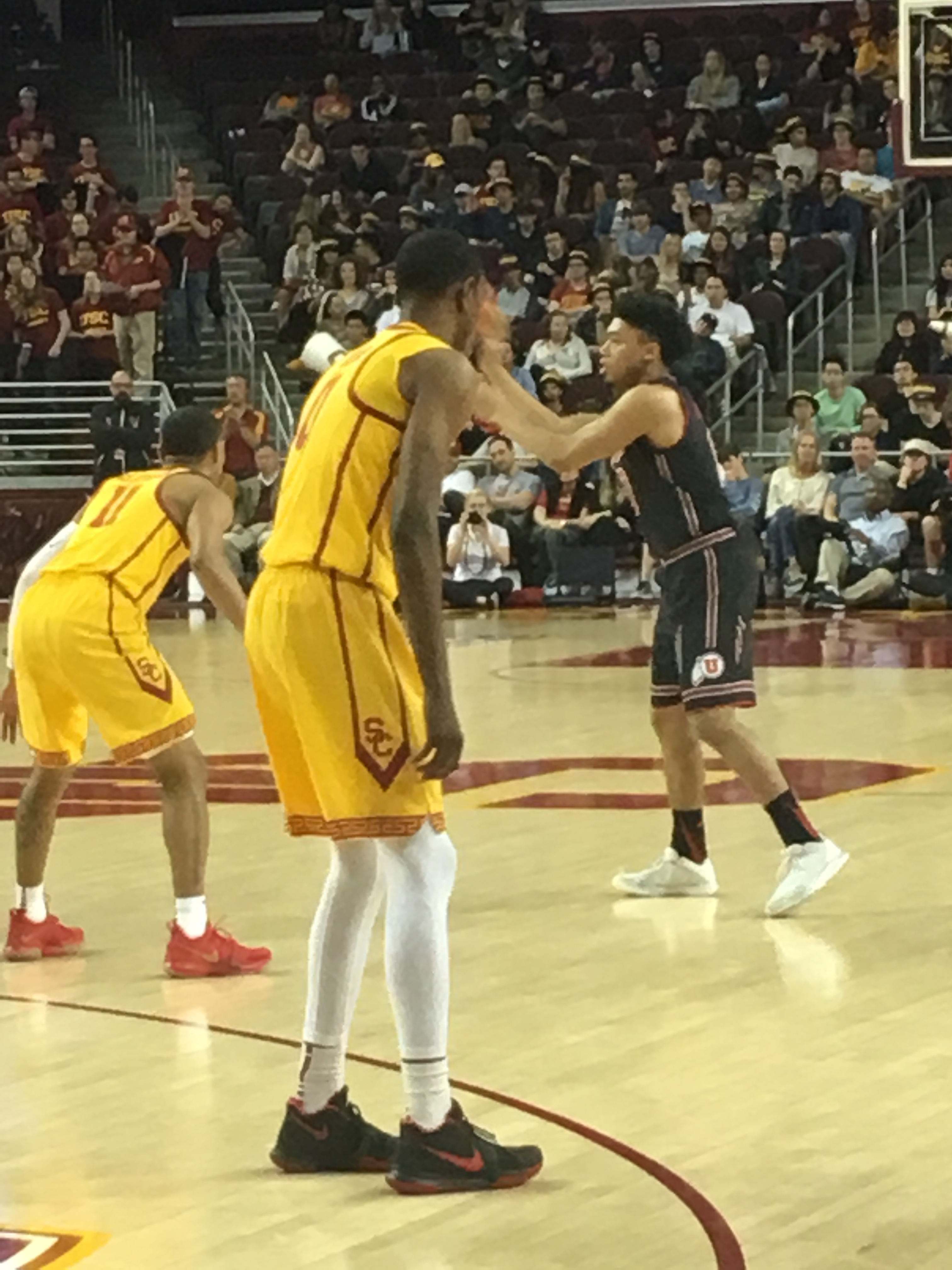 Despite only six points in the first half between Chimezie Metu and Bennie Boatwright, the Trojans boatraced the Utes 84 to 67, including a scintillating 46-22 first half, to improve to 13-6 overall and 4-2 in Pac-12 play.

The conference’s No. 2 three-point offense exploded in the first half, notching 1.43 points per possession performance with 60 percent shooting from beyond.

They would finish with 1.23 per trip.

Remarkably, nobody hit double-digit points before the break, as the three starting guards of Shaqquan Aaron, Jordan McLaughlin and Elijah Stewart each notched nine points.

“This is the law of averages taking place,” Andy Enfield said. “We were the best shooting team in the conference going into Washington, and then we went cold. Now we’re heating up.

“We shoot well. It’ll all take care of itself.”

USC ended up knocking down over half from downtown.

Early and often, he circled around Utah’s 6-foot-10 David Collette to find open shooters. The Trojans capitalized with four threes before the first media timeout, and two more by the next one.

Utah exacerbated problems by coughing it up three times in as many minutes, upping the lead to 24-9.

Matthews notched 17 points on 12 shots, looking smooth from deep. His best sequence was a pump-fake that led to a step-in jumper to push the margin to 28.

Matthews and Aaron emphasized how much they wanted to fight for Melton, but even moreso how they wanted to crush Utah for trash-talking. (Sarah McGrew)

The second half was academic, but there were fireworks.

Boatwright and Metu emerged from their shells to take over, combining for 18 points in the final frame.

There were signs of the deadly five-out offense, as both hit threes against slower forwards.

There was the almost typical “Death From Above” Metu dunk.

Unfortunately, Metu and Boatwright also both committed technicals with under eight minutes left. Metu taunted a defender after his slam, and Boatwright and Utah forward Chris Seeley tussled after a rebound.

“Utah, especially (head coach Larry Krystkowiak), talked a lot of trash,” Jonah Matthews said. “About our team, or even about De’Anthony. I think Chimezie just let out some anger there.”

When this offense combines with a resurgent defense – now No. 2 in the conference per Kenpom – this team’s prospects elevate dramatically.

You may have excused the recent defensive rise on competition, as Colorado and Cal are hardly lethal from the floor. However, this night is different.

Krystkowiak’s squad – losing their first to the Trojans in nine tries – needed garbage time to reach 47 percent from the field. They entered Galen Center connecting on 55 percent of all their shots.

On top of that, the turnover party continued, as the Trojans forced 17 more, and have totaled 89 since the Washington game in late December.

Sure, the defense might have taken their foot off the gas in the second half, ceding 45 points in the frame.

The Utes still ended up at just a point per possession.

While the concerns persist of the athletic department’s handling of the De’Anthony Melton situation, this defense has made up for his absence – minus a bad 10 minutes in Palo Alto.

“Our players feel for him,” Enfield said. “He’s a fabulous person. The day he found out he was done for the year, he had his best practice. He even stayed 45 minutes afterwards with managers to work on his shot.

With that said, he made up for some bad defense elsewhere last year. We are playing better team defense now.”

Colorado leapt to No. 53 after winning three of four (Arizona, Arizona State and UCLA) and Middle Tennessee State and New Mexico State both rank in the top-50.

RPI numbers will change as the season roars on, but the tournament hopes brightened tonight.

A Jan. 18 road flight to Eugene, Ore. against the Ducks is next. After that, Oregon State. Sweeping the Beaver State isn’t necessary to play themselves off the bubble, but tonight showed pieces coming together.

Don’t quote this, but with Arizona, Arizona State and UCLA struggling to live up to their hype, this conference is there for the taking*.

What a redemption tale that would be.