Dodge: USC defends itself instead of Melton 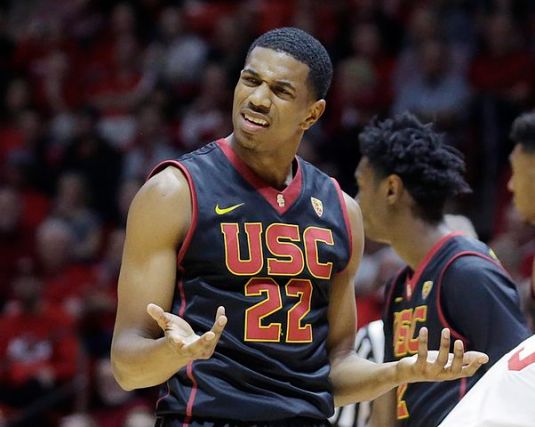 De’Anthony Melton, 22, must sit out the rest of the season, as mandated by USC. (AP/Rick Bowmer)

LOS ANGELES – The USC administration and athletic department ruled to bar De’Anthony Melton from playing the rest of the 2017-2018 basketball season.

This has to be said, loud and clear: Melton is innocent.

The U.S. Attorney’s Office cleared him, and he completely complied with USC’s internal investigation that found a close family friend – not Melton – received extra benefits last summer in Las Vegas.

None of the federal accusations are directed at Melton anymore.

The NCAA could punish Melton based on his association with Elliott, but from Ed O’Bannon to Todd McNair, suing the NCAA for its archaic rules is starting to work out more.

This isn’t a column about the investigation, per se. Nathan Fenno at the Los Angeles Times did a wonderful job summarizing the details of the decision.

Instead, let’s focus on the University of Southern California and its history of disposing victims – whether athletes or not – to the wayside to cover for themselves.

“Punishing innocent ppl…I see what y’all on now @USC_Athletics,” Chimezie Metu wrote on Twitter on Wednesday evening. “He didn’t do anything wrong but let’s suspend him bc we’re selfish and have to protect our image…makes sense.” 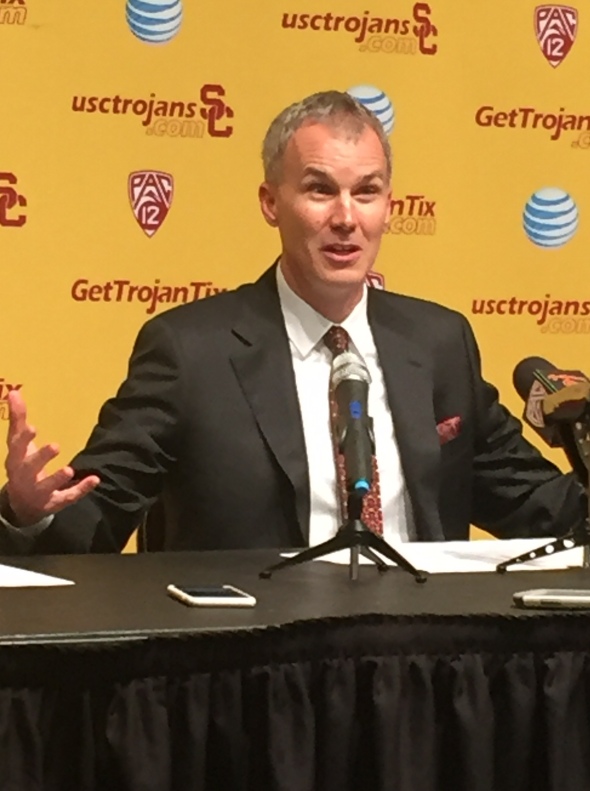 Andy Enfield has consistently defended Melton, but has not yet offered an official comment. (Galen Central)

You can criticize Metu for his on-court antics or his inconsistent interior defense – he was awesome against Colorado, by the way – but he hits the nail on the head with this sentiment.

Before I continue, let me lay potential biases to rest. I am a master’s student at the Annenberg School of Communications and Journalism. However, my father indoctrinated me in the religion of Michigan football. Several Rose Bowls haunt me.

With that said, I cherish my time on Trousdale Parkway, as my experience so far has rapidly pushed me towards my passion of sports journalism. I don’t wish to unnecessarily attack an institution that connected me to my exciting and new life.

It’s necessary to hold President Nikias’ administration and the athletic department’s feet to the fire here. They are promoting a culture where the school is more important than the protection of its student body.

Two Keck School of Medicine deans were fired over the last 18 months.

Despite knowledge of Dr. Carmen Puliafito’s methamphetamine abuse or sexual harassment from Dr. Rohit Varma in 2003, both were allowed to continue working at the school.

On Oct. 26, 2017, doctoral social work student Karissa Fenwick sued the university for not taking necessary action on her sexual harassment allegations by associate professor Erick Guerrero. The suit accuses Guerrero of trying to coerce Fenwick into sex at a Jan. 2017 conference in New Orleans. Additionally, he is accused of attempting to silence her from reporting the incident.

A USC spokesperson stated that the Dworak-Peck School of Social Work and the larger administration, “thoroughly investigated the claims, and based on the findings it disciplined the faculty member involved…(he) will not be able to teach classes or supervise students.”

Without overly involving loved ones, my wife is a doctoral student at Dworak-Peck. Guerrero screened doctoral candidates during their application processes as recently as October.

Three university incidents. Each time, USC allowed the accused to continue interacting with students, even with the knowledge of wrongdoing.

In Puliafito’s case, he associated with criminals and drug addicts to the point where a 21-year old woman overdosed in his company three weeks before he resigned.

Despite claims that the he knew nothing, Nikias received tips of the incident. Only after the Los Angeles Times gathered enough evidence to prove his claims false did Keck completely remove Puliafito.

The athletic department is right in line with public perception mattering more than fighting for the students.

“De’Anthony is a valued member of our program,” USC released in a statement, “He will have options for his future at USC, including remaining in school on scholarship while continuing to work on his degree and practicing with the team, and potentially compete for the Trojans in the 2018-19 season.”

Translation: The NCAA will kill us if we make him eligible this year, so we’ll drag out his ineligibility one more year to appease them.

To be fair, Lynn Swann is in a tough position.

When Mike Garrett’s regime defiantly advocated for the football program during the Reggie Bush and Todd McNair scandal in 2010, the NCAA levied huge sanctions against the football and basketball programs.

In retrospect, USC was ethically right to fight back, as the California Second District Court of Appeals intimated during Todd McNair’s lawsuit that the evidence the NCAA used was used in, “disregard of the truth to enable the (NCAA committee) to arrive at a predetermined conclusion.”

Basically, the last time USC defended a student-athlete, they got burned.

Instead of standing up for a player that – again, did nothing wrong and didn’t know about the violations – Swann has decided to compromise and allow Melton to fall on the sword for the rest of the department’s reputation.

“They’re thinking that keeping him out for the season,” Melton’s lawyer Vicki I. Podberesky said, “should be more than enough to allow him to regain eligibility for the coming season.”

This is a different time than 2010, however. The NCAA lost tremendous credibility when it was forced to pay former college athletes $208 million for using their likenesses in video games.

They face a fight against Todd McNair this April after the court endorsement cited earlier.

Even cases the NCAA won, like when Northwestern quarterback Kain Colter attempted to unionize with his teammates, curbed NCAA power as they allowed schools to offer stipends to its student-athletes.

Unless you’re Rick Pitino or Ole Miss football, you got a shot to win.

It just seems that Nikias and Swann don’t want a fight.

It’s been a rough year for all of USC to explain to parents that the university will protect their children.

This was a chance to reverse the school-wide narrative.

4 thoughts on “Dodge: USC defends itself instead of Melton”