Note: Wednesday games will have abbreviated thoughts, rather than full recaps. I’m a master’s student at USC, and I have class in the evenings during games. Secret streaming in class for the win. 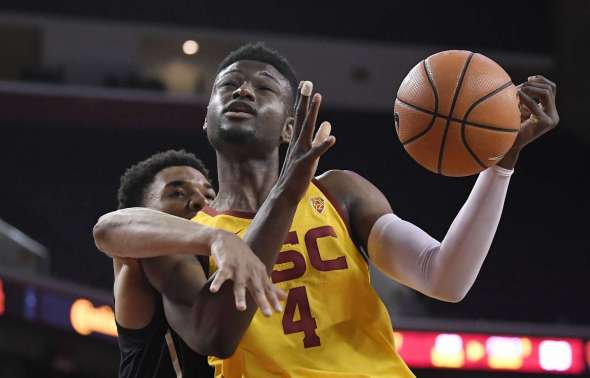 Chimezie Metu, 4, fights through a foul against Colorado Wednesday night. He connected on eight free throws to finish with 14 points. (AP/Mark J. Terrill)

LOS ANGELES – Chimezie Metu loomed large, notching a double-double off 14 points and 13 rebounds to go with six blocks to fuel a convincing 70-58 victory over the Colorado Buffaloes Wednesday night at Galen Center.

After Nik Rakocevic entered after the first media timeout to catalyze an 11-3 run to seize the lead, Metu took the baton to offer his best defensive game of the season.

Colorado never felt comfortable and cooled off considerably after their scorching shooting over the ranked Arizona schools last week.

Jordan McLaughlin offered an incredibly efficient performance with 20 points on eight shots, but the real story is the defensive response from a bad 10 minutes in Palo Alto.

The numbers were comprehensively impressive:

Several players had their defensive moments.

Metu angrily swatted two blocks in one possession, leading to a key run early in the second half to take control.

Jordan Usher scored a layup off a steal, affected a shot two possessions later and broke open for a transition three at the 12-minute mark of the first half.

Perhaps most impressively, Jordan McLaughlin stole the ball to prevent a Colorado fast-break layup to take the lead in the second half. He followed that up immediately with one of his four threes.

While the end of the Stanford game showed the frustrating inconsistency of the interior defense, the truth is the defense a bad 10 minutes away from a perfect record since Washington.

After five games, the Trojans rank No. 2 defensively in the conference per Kenpom, and first in forcing turnovers.

While tonight might be the result of a Colorado team regressing to the mean after two anomalous performances last week, it’s undeniable the vast improvement on defense, especially in the frontcourt.

The Utes visit Westwood tomorrow night. Right now, Kenpom projects a 78-73 win for the Trojans with a 67 percent chance of snagging their 13th win.

Dodge: USC defends itself instead of Melton »
« Colorado at USC Preview (1/10)