They have five single-digit wins over teams outside the Ken Pomeroy Top-100 (Belmont, Seattle, UC Davis, Loyola Marymount and Montana). Virginia Tech and Gonzaga obliterated them from behind the arc in respective 103-79 and 97-70 wins.

When USC hosts the Huskies to open Pac-12 play Friday night, the Trojans look to end the weirdness, and take advantage of a Washington defense still adapting to Hopkin’s 2-3 matchup zone.

Hopkins, in his first year in the Pacific Northwest, coached with Jim Boeheim at Syracuse for 20 years, and brought the signature zone with him.

Here’s how Syracuse deployed this defense during Hopkins’s tenure. Feel free to mute the music.

In concept, this defense makes it really hard for teams to find room in the middle of the lane, and the length on the perimeter creates bad jump shots for the opposition. You can see that discomfort in several of the offensive sets above.

Washington has…struggled with these concepts.

Immolation No. 1 from Virginia Tech.

Immolation No. 2 from Gonzaga.

Both Gonzaga and Virginia Tech did exactly what you need to do to attack this defense: Score in transition while the defense isn’t set, and pass quickly to set up open three’s.

Senior point guard Jordan McLaughlin leads the No. 34 (out of 351) offense in the nation in offensive tempo, averaging 15 seconds a possession. By pushing the ball up the court, he’s able to get zone defenses out of position to find open shooters.

McLaughlin dishes 7.8 assists a game, good for No. 5 nationally.

Helping those numbers is an elite three-point shooting USC team.

USC ranks No. 22 nationally and leads the conference in effective three-point field goal percentage, an adjusted measurement for competition. This bolsters an offense currently scoring at an 82-point clip. 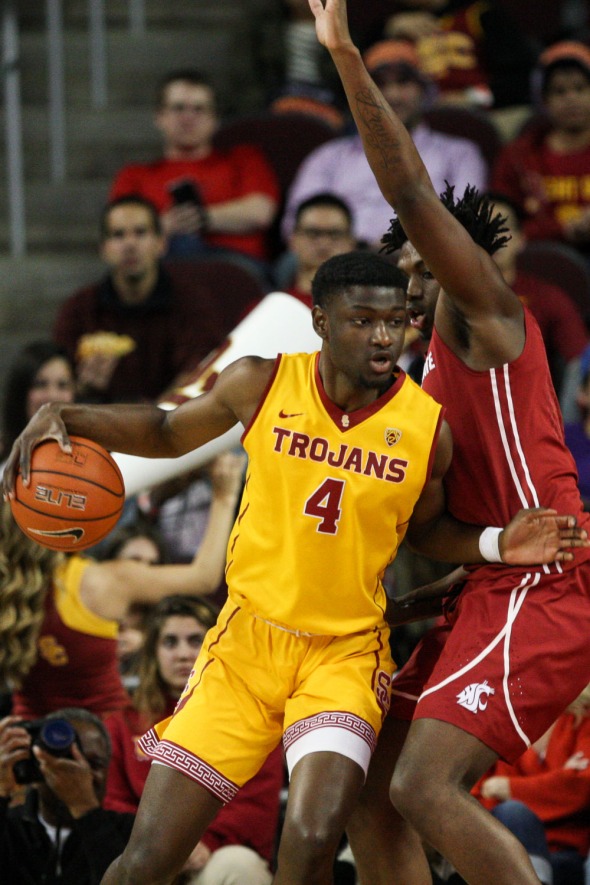 USC Trojans forward Chimezie Metu (4) drives to the basket during the first half of an NCAA college basketball game against the Washington State Cougars on Sunday, Jan. 25, 2017, in Los Angeles. (Michael Yanow)

Facing a below average three-point defense in Washington, the Trojans look to thrive on offense.

On the other side of the ball, USC faces a team that compensates for a lack of jump-shooting by relentlessly attacking the rim.

As a team, however, they are No. 14 in free throws attempted, as the three guards and 6-foot-8, 245-pound frontcourt bruiser Noah Dickerson force the defense into tons of fouls.

All four hit over 72 percent of their free throws, allowing the offense to manufacture points.

Looking at the Kansas upset, Washington slashed to the basket with an array of drives, alley-oops, and post-ups. In particular, Nowell and Dickerson hit acrobatic floaters to add to the effort in the second half.

If USC plays the game in the proverbial trenches, the Huskies have a shot.

Due to the height of Metu and Boatwright, and a defense that generally doesn’t rack up fouls, the Trojans possess the advantage here, as well.

According to Ken Pomeroy, Washington is statistically worse than Middle Tennessee State and New Mexico State, whom USC outlasted to win the Diamond Head Classic title last week in Hawaii. In fact, Washington ranks closer to UC Santa Barbara than elite conference teams such as Arizona State or UCLA.

Washington is not Texas A&M or Oklahoma, but USC showed it can lose to inferior teams after the Princeton debacle. Despite this possibility, expect USC to continue its recent surge and start off conference play right.

With that said, this Washington team is weird. Be warned.