Catching Up With: Baxter Holmes 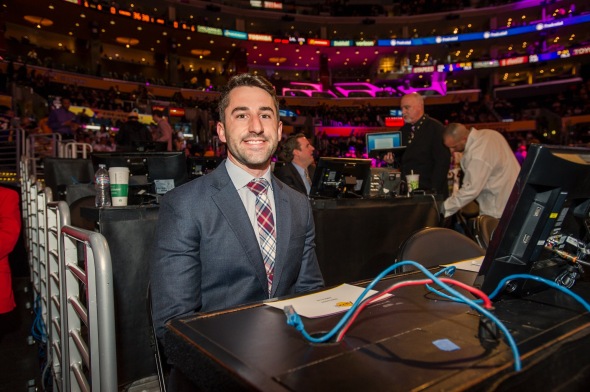 Baxter Holmes arrived at the Galen Center as a fresh-faced—albeit thickly bearded—reporter for The Los Angeles Times in 2009, just months after graduating from the University of Oklahoma.

Since then, his career trajectory has rivaled that of any of the players he covered.

After more than three years at the Los Angeles Times, he moved east to cover the Boston Celtics for The Boston Globe. He returned to Los Angeles to cover the Lakers for ESPN, and is now a national NBA writer for ESPN.

If you missed his feature on the NBA’s secret sandwich addiction, pause and give it a read it now.

Galen Central caught up with Holmes via email, with the Trojans playing his alma mater on Friday at Staples Center.

What stands out to you from your time covering USC basketball?

When I think back on my time covering the USC men’s basketball team for The Los Angeles Times – which spanned the 2009-10 season through most the 2011-12 season – I think of a program in transition. Kevin O’Neill had returned to the college ranks and took over for Tim Floyd, who resigned in 2009 amid allegations of NCAA infractions. O’Neill would later have to deal with the fallout from that investigation, which included sanctions, but despite everything he and his team were up against, O’Neill helped keep the Trojans competitive and take them to the NCAA tournament in 2010-11. I also think of covering Nikola Vucevic, who rose from relative obscurity to become a first-round draft pick in 2011. In all, I was such a young reporter then – only a couple years removed from graduating from the University of Oklahoma in 2009 – but it was a great opportunity and situation to cut my teeth as a beat reporter. Those were some really fun times and vital to my career.

#tbt me, freshman year at @uofoklahoma, back when I covered the OU men's basketball team for the student paper, the OU Daily.

What is your favorite Kevin O’Neill story?

It’s hard to pick just one, but I think, in general, I’d point to O’Neill’s practices. They were open to the media, and often, I was the only reporter present. For hours, he’d drill his players on defense, defense, defense – as if nothing else in the world mattered. He’d use colorful language, stomp his feet, shout and note that if they didn’t play with the right effort and do exactly what he wanted, they’d get blown out of the gym. I mean, I don’t know if I’ve ever seen anyone care about anything as much as KO – as he was known – cared about defense. And then the next night, his Trojans would make life miserable for the opponent, holding them to maybe 60, 50 or even somewhere in the 40-point range. Privately, he’d say that he was never sure how his offense was going to perform, but he knew that, at the very least, his squads would play some of the best defense in the country – and that would give them a shot to win every night. At the very least, his guys played with an effort that was hard to match.

Now that you are covering the NBA for ESPN, which “Projan” is the best interview subject?

One of my favorite players to talk to is Vucevic, whom I covered at USC. He was a special player then and continues to play at a very high level in the NBA, but he’s incredibly kind and genuine. He always calls me by my first name, asks how I’m doing and we catch up, even though we only see each other once or twice a year, at most. I really enjoyed writing a feature about him for ESPN a while back. His story is pretty remarkable.

MORE: Catching Up With: Julian Jacobs