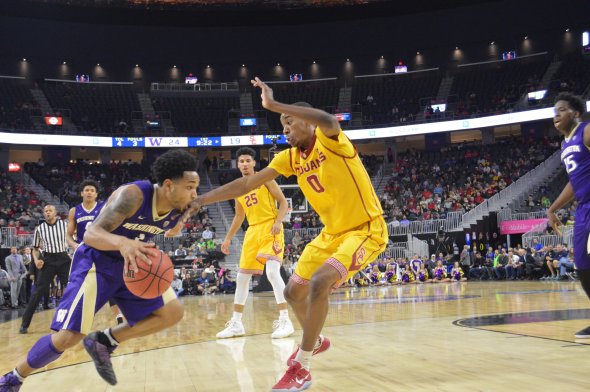 It wasn’t pretty, but USC got the job done.

The Trojans (24-8) defeated a Markelle Fultz-less Washington (9-22) 78-73 in the Pac-12 tournament Wednesday night to set up a rubber match against UCLA Thursday night.

More importantly, it now seems like a foregone conclusion that USC will be playing in its second NCAA tournament in a row.

USC struggled early, trailing by as much as 10 points in the first half before cutting the deficit to two at the break. USC struggled in the end, allowing a 14-point second-half lead to shrink to three with less than 10 seconds remaining. In the end, David Crisp’s game-tying three-point shot didn’t fall, and a sense of relief spilled over the entire squad after Shaqquan Aaron’s clinching free throws.

“It’s on us as players,” Jordan McLaughlin said regarding USC needing to play a full 40 minutes. “The coaches do a good job getting us ready for the game. Defensive strategy and everything, they set it up perfectly and it’s on us to come and play with energy.”

The first 11 minutes of the second half was barely enough, as the Trojans went on a 30-14 run to save themselves from a potential disaster. The stretch was highlighted by a six-point possession, four Bennie Boatwright free throws and a Chimezie Metu layup following a Carlos Johnson technical foul.

The sophomore big man was a beast on both ends of the floor, and got well-acquainted with T-Mobile Arena’s rims in the process with several dunks.

He scored a game-high 24 points and added a game-high nine rebounds. It was tied for his second-highest scoring output of the season, and given the stakes, it’s easy to argue that Wednesday night was right up there with earlier this season in Boulder for Metu’s strongest performance of the season.

He scored 12 points in each half, and was the anchor behind USC’s comeback.

“We took some bad shots early, contested jump shots, and we just weren’t playing like we’re capable of offensively,” USC coach Andy Enfield said. “I thought our players did a great job of coming back and taking the lead in the second half and hold on.”

Metu also was an intimidating presence in the paint on defense, and had two blocks to his name. If the Trojans have any chance against UCLA tomorrow, they will need another effort like this one from the recently named Pac-12 Most Improved Player. But despite the added pressure of a crosstown rivalry in effect, Metu doesn’t think there’s any extra importance.

1. A pumped-up Enfield had quite a few things on his mind in the post-game presser. Below is the money quote:

“I think there’s an East Coast bias in the media. I coached in the ACC for five years as an assistant coach at Florida State. I knew it then. But when you’re out on the West Coast, it’s very obvious. Our games start later. A lot of the media and the people that are bracketologists, they don’t even watch our games. They get the internet. They’re in bed by 10 PM East Coast time and our game’s just starting or maybe it hasn’t started yet. And then they cover certain leagues all season, and they don’t really cover the Pac-12.”

“Our RPI is in the 30s, the high 30s and we’re 24-8. So we feel like we’re in pretty good shape for the NCAA tournament ,being a decent seed as well, because we have 24 wins and tomorrow will be our eighth game against teams with 27 or more wins.”

Those eight games against teams with at least 27 wins is the most in all of college basketball.

3. The Trojans made their first 19 free throws, but missed five of its last 10 from the charity stripe, including four in the final minute to leave the door open for Washington.

USC Storms Back, But Can’t Close in 76-74 Loss to UCLA In Pac-12 Tournament »
« USC Finishes Regular Season on High Note With Strong Defense