The game was over almost as soon as it started Wednesday night at the Galen Center, as USC (22-8, 9-8 in Pac-12) blitzed Washington State (13-16, 6-11) out of the gate and didn’t let up en route to a 87-64 thrashing. Jordan McLaughlin led the Trojans with 19 points, 10 assists and nine assists while Chimezie Metu contributed 15 points and nine rebounds as the Trojans ended a four-game losing streak.

With the win, USC eclipsed its win total from last season while tying its nine Pac-12 wins from 2015-16. “If you had told us before the season we’d be 22-8 going into our last game, we would have taken that,” USC head coach Andy Enfield said immediately following the win.

The Trojans’ lead never fell below 20 points in the second half, so the most exciting moment down the stretch was Jordan McLaughlin chasing a triple double, the second in USC Basketball history (Daniel Hackett had the first). The junior guard had nine rebounds late as he looked to grab an open rebound on his side, but teammate Jonah Mathews soared across the lane to swipe it away. The USC bench let out a disappointed yelp, while Mathews could only help but smile for his unintended ‘mistake.’

“We talked in the locker room. Everything’s good,” McLaughlin said, smiling about his freshman peer. As for Mathews? “I’ll never hear the end of that.”

The Trojans’ loss to Arizona State Sunday afternoon likely put them on the NCAA Tournament bubble, but USC deflected talk about their at-large hopes. “Coach said we had a two-game season, starting with tonight,” stated McLaughlin. Now, it’s a one-game season. We’ll take it game by game.”

Stewart on the Sidelines

After starting the Trojans’ first 29 games, Elijah Stewart was replaced in the starting lineup by Shaqquan Aaron. It’s possible that Stewart’s pair of excruciating final-minute miscues against Arizona States – taking a three-pointer while USC was trying to run out the clock, then missing on the front end of a 1-and-1 – did not sit well with Enfield.

Stewart didn’t score until midway through the second half, knocking down a pretty floater in traffic symbolic of the junior guard’s agonizingly inconsistent flashes of brilliance. Enfield said it was a ‘coach’s decision’ for Stewart to come off the bench, but did praise Stewart’s night. “He really stepped up in the second half, and really turned his game up,” he added. “We need him to give us that energy on a nightly basis.”

In It To Win It

Facing a five-game losing streak, USC raced out of the gates against the Cougars. The Trojans hit nine of their first 13 shots, including four three-pointers, to capture a 22-7 lead that never dipped back below nine points. “Coach told us not to be lackadaisical out of the gate,” said McLaughlin. “Tonight, we executed the game plan.” 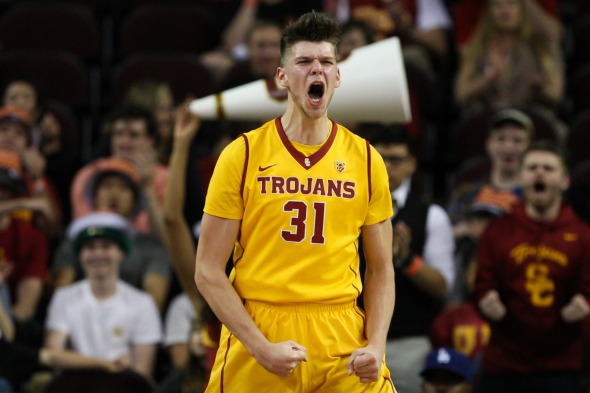 Nick Rakocevic pitched in a solid night off the bench, racking up a pair of three-point plays minutes apart to help USC extend their first-half lead. (Michael Yanow/Galen Central)

The Trojans were all too eager to swing the ball around all night, assisting on 71 percent of their field goals. “Our model is play fast, play smart,” McLaughlin said. “Tonight, their [WSU’s] defense was helping a lot and everyone was making the right plays. We might have had a good shot, but we passed it up for a greater shot.”

After stagnating on offense late in their loss to Arizona State on Sunday, Coach Andy Enfield was more pleased, however, with the Trojans’ strong defensive effort off the bat. “The difference tonight was our defense,” Enfield said. “We had blocked shots, steals, deflections and we ran them off the three-point line.”

USC closes out the regular season on Saturday against Washington (9-20, 2-15), whom the Trojans defeated in Seattle earlier in the year. The Huskies’ superstar freshman guard Markelle Fultz sat against UCLA tonight (sore knee), and is questionable for Saturday.

The Trojans’ home finale could also be a preview of their first-round conference tourney matchup. The two teams are slated for the 6-11 matchup in next week’s Pac-12 Tournament, barring Utah losing to both Stanford and Cal in Salt Lake City.

Will Enfield and Co. play things close to the vest ahead of next Wednesday? We’ll find out in three days.