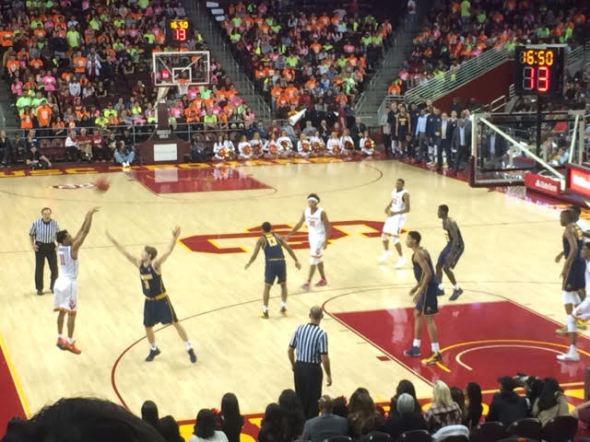 Two Ivan Rabb free throws with 5.4 seconds left gave Cal a thrilling 74-73 win over USC on Sunday night at Galen Center. The Trojans fell to 15-2 on the season, including a disappointing 2-2 start in conference play following an undefeated non-conference display.

Chimezie Metu and Jordan McLaughlin each scored a game-high 20 points, and De’Anthony Melton added 13. No other Trojans scored in double figures. Rabb had 17 for the Golden Bears, who also moved to 2-2 in Pac-12 play.

Missing 11 free throws is a killer for a team in any game. It only gets magnified more in a close contest like this one was. USC made just 10 of its 11 attempts from the charity stripe, an abysmal 47.6 percent. As a team, the Trojans were shooting 74.5 percent on free throws heading into this affair, including 82.4 percent in conference play.

The two biggest free throws the Trojans had in the game were both missed by Jordan McLaughlin. The USC point guard was fouled with the team trailing 72-71 with 29 seconds left. He was an 83.8 percent shooter from the line in USC’s first 16 games, but missed five of his eight free throws Sunday night.

After the second missed free throw, Elijah Stewart intercepted a pass leading to a McLaughlin layup to put the Trojans up by one.

“It was just one of those nights at the line,” McLaughlin said afterwards. “That’s basically where we lost the game.”

While Cal wasn’t that much better on free throws (7 of 14), the Golden Bears made them when they counted most. Rabb was fouled with five seconds left, and drained both to give the away team a one-point lead. Rabb then blocked McLaughlin’s layup attempt at the buzzer to seal the victory.

“The last play, there was a lot of contact at the rim,” USC coach Andy Enfield said. “You can’t ask for more, Jordan could’ve easily scored or gone to the foul line, but he didn’t.”

While the whistle on the final play could have gone either way, the Trojans have no one to blame but themselves for letting this one slip away. Simply put: You can’t expect to leave that many points at the line and beat good teams.

1. Metu’s offensive skill set has vastly improved from last year. The sophomore big man showed off his improved mid-range game by knocking down several jumpers outside the paint. Metu scored 10 straight points at one point for USC to keep the team afloat in the first half.

2. Freshman De’Anthony Melton continues to impress. He simply stuffed the stat sheet against Cal. Melton had 13 points (including two big three-pointers in the second half), seven rebounds, four assists, three steals and two blocks. He looked like the best player on the floor, which is impressive considering there’s a decent chance multiple future first-round picks were playing at Galen on Sunday.

3. McLaughlin took all four of USC’s shots in the final minute. The Trojans scored two points on those possessions. McLaughlin also turned the ball over with 1:16 remaining. It felt like one of those situations where USC dearly missed having a healthy Bennie Boatwright.

4. While a 35 to 28 rebounding disadvantage may not seem like that big of a deal for USC, it led to an 18-6 discrepancy in second-chance points and six more shots from the floor overall for Cal.

5. USC’s next game is at Utah Thursday night at 7 PM PT. The trip to the mountains is always a tough one. It would be a big statement if the Trojans can at least split this upcoming two-game set against Utah and Colorado, at least compared to last season’s squads struggles away from home.