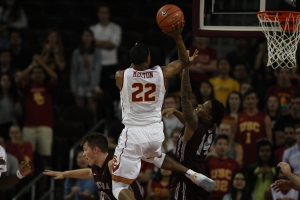 USC delivered a huge non-conference win by upsetting Texas A&M, the defending SEC Champion, on the road. USC went on a 10-1 run in the final 3:30 to complete the comeback. Here are a few notes from Friday’s game.

1. De’Anthony Melton is already turning into one of USC’s most important players to start the season. While the freshman guard didn’t start, he was out on the floor during crunch time. He rewarded Andy Enfield’s faith with a big three to cut Texas A&M’s lead to two with 2:09 left.

He’s made an even bigger impact, however, on the defensive end so far. He lived up to that notion by coming up with a steal on the inbounds after a remarkable Jordan McLaughlin to Chimezie Metu alley-oop gave the Trojans the lead with 17.7 seconds left. The Aggies had to immediately foul Melton, who made one of two free throws to extend it to a two-point game. DJ Hogg, who made five threes in the game, missed from behind the arc, allowing the Trojans to escape with the win.

Melton is averaging 9.0 points, 7.7 rebounds, 2.7 assists, 2.7 assists and 0.7 blocks per game, showing his stuffing of the stat sheet capabilities. He’s shooting 50 percent from the floor, and has turned the ball over just four times. He simply makes plays, and his role will only grow if he continues to perform like this.

2. Bennie Boatwright made his season debut for USC after missing the first two games with back spasms, and made just three of his 13 shots, including 1-8 from beyond the arc. He looked rusty, but can you really blame him? Boatwright will need more time on the court to get his rhythm back.

USC’s offense, though, gets a lot more open looks when Boatwright is on the floor. He’s a matchup nightmare for big men who have to guard him far from the basket. That opens up opportunities for more offensive rebounds, and despite USC’s size disadvantage, the Trojans came up with 18 offensive rebounds vs. Texas A&M.

3. USC has trailed by at least nine points in the first half in each of the team’s first three games. Chalk up another slow start for the Trojans, who scored 10 points in the game’s first 12 minutes. They missed their first 11 threes, but closed the halftime in impressive fashion, making four in a row from behind the arc for a seemingly improbably halftime lead.

The Trojans also missed nine of its 10 three-point attempts in the second half. It’s difficult to win a road game against a good team when you make five of 26 three-pointers, but USC somehow did it.

4. I thought Texas A&M big man Tyler Davis against the USC frontcourt could be advantageous for the Aggies, but he was limited to eight points and eight rebounds in 24 minutes. On the other side, Metu had 14 and 9 along with solid interior defense. Once again, he did it all without being in foul trouble, as he was whistled just twice in 29 minutes.

While Metu’s game-winning alley-oop slam will be all over the highlight reel Friday night, he displayed a versatility with his offensive game as well. In the second half, he scored on a baby hook in the paint and on a mid-range jumper. If the sophomore forward continues to develop his offensive arsenal, he and Boatwright will be a lethal duo for the Trojans.