USC Shakes Off Sloppy Start, Roars To 75-61 Win Over Montana

After losing the season opener to Portland State two seasons ago, USC Basketball didn’t let the Big Sky Conference get the best of them on Friday night. After a slow start, USC picked up the pace and raced to a 75-61 season-opening victory over Montana at the Galen Center on Friday night. Junior guard Elijah Stewart led the way with 30 points, while sophomore guard Shaqquan Aaron had 17 and sophomore forward Chimezie Metu had 14 points to go along with seven rebounds and two blocks.

Something to Stew About

Jordan McLaughlin is still the captain and unquestioned leader for USC, but Elijah Stewart may very well be the guard this Trojans squad can steadily rely on to put points on the board, pouring his career-high on just 12 shots. The junior was the only Trojan to make a field in the game’s first 12 minutes, then pitched in a 7-0 run by himself in the second half stretch run as USC scored 10 straight to break away from a Montana squad that had only trailed by five.

While he went 4-of-6 on three-point attempts, the most impressive aspect of Stewart’s was his newfound fearless desire for contact. Stewart went 14-of-16 at the line, smashing his previous career high of six attempts. “James Harden and DeMar [DeRozan],” Stewart said on whose games he’s been watching and trying to emulate when it comes to getting to the free throw line. “They’re crafty in getting to the line, and they have really efficient games.” Stewart also mentioned how he spoke with DeRozan at a football game earlier this fall, when the Toronto Raptors All-Star guard was honored on the field along with other USC Olympians who competed at the 2016 Rio Games. 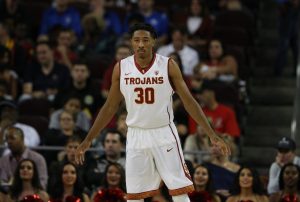 It became early on that Aaron, the Louisville transfer, would slide right into the USC starting roster, and the slender 6-foot-7 guard didn’t disappoint with 10 points in his first half of basketball since March 2015. He scored the last seven points of a 13-0 Trojan run that raced the team from a six-point deficit to a seven-point advantage, showing off his slashing ability and three-point stroke on consecutive possessions. Aaron finished with 17 points, second on the team, to go along with seven rebounds. “There were some nerves. I hadn’t played in a long time,” Aaron said after the win. “But in the end we started having fun. It was great finally play.”

The Trojans’ breakneck pace in recent years has resulted in flurries of turnovers, and that was the case Friday night as USC had as giveaways as points (8) in the game’s first 11 minutes. The team clamped down for the rest of the opening frame, turned a 6-point deficit into a 4-point halftime lead, and never trailed in the second half.

“This was a unique game because they [Montana] had four guards in the game,” Enfield noted. “We had to alternate between going big and small. [Charles] Buggs gave us great energy in the first half with blocks and steals.”

The Buzz on Bennie

USC’s second-leading returning scorer, Boatwright was declared out earlier in the evening with back spasms. Enfield said that Boatwright was close to playing tonight, but that the coach prefers to not rush back players if they’re not yet at 100 percent health. That said, Boatwright shouldn’t miss significant time. “If this was the Pac-12 Championship Game, he would have played,” Enfield added.

USC had to use an experimental lineup in Boatwright’s absence, including starting true freshman Nick Rakocevic. (31) (Photo: Michael Yanow)

Enfield noted that the Trojans missed the 6-foot-11 forward in the early going, falling behind by 10. “Without Bennie, we were just trying to find ourselves,” Enfield said. “There were some nerves and anxiousness with only three returners. I think that showed in the first 10 minutes of the game.”

The Trojans host Nebraska-Omaha at the Galen Center at 4:00pm on Sunday. After a tough opening contest, Enfield said he hasn’t scouted the Mavericks quite yet. But after avoiding a tricky opener without one of their only returners, USC can take away confidence heading into the weekend.

The first 1,000 fans at Sunday's @USC_Hoops game will receive a No. 11 @itsmclaughlin11 jersey t-shirt pic.twitter.com/8X5d3Wr0Mc