For USC, 21-Win Season Shows Sky Is The Limit

Don’t quite call it a breakthrough. Instead, view USC Basketball’s 2015-16 campaign as leaping up two stairs at a time on an unfinished journey to where the Trojans can aspire to be. A 21-12 USC squad will in all likelihood find jubilation on Selection Sunday, notching the program’s first NCAA berth in five years after winning 10 games in a Pac-12 conference likely sending seven teams to the Big dance. The buck doesn’t stop there.

The current cast of Galen Center competitors has a chance to be remembered as not just the team that slammed and sniped the Trojans out of a four-year funk, but the pioneers that blazed a trail for USC to join Oregon and Arizona atop the Pac-12 mountain. The foundation is set; the next step is for the Trojans to build themselves into an annual powerhouse.

Through the first three-quarters of the season, it looked like the Trojans would be ‘Extreme Makeover: College Hoops Edition’ and flip from 20 losses to a Top 20 ranking. Blitzing opponents with a fast-pace, flashy style, a 7-3 Pac-12 start included brief stays atop the conference as well in AP Top 25 poll. A 3-7 slide in the season’s final 27 days took wind out of the sails of Trojan hype, but 21 wins was the program’s most since 2008-09. For Andy Enfield, the nine-win boost is more than enough proof for the pudding. “I think we’ve turned quite a few corners,” the third-year head coach said following USC’s 80-72 loss to No. 12 Utah in the Pac-12 Tournament quarterfinals. “In fact, we might be circling right now.” He’s right. 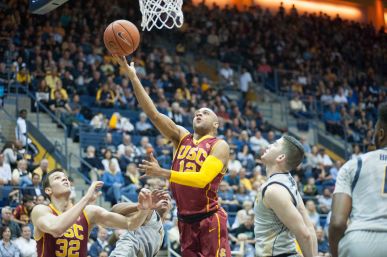 In three months alone, USC had more wins to circle than the program’s previous three years combined. Those in the building won’t soon forget a truly epic quadruple overtime saga of a victory over Arizona, while the Trojans looked lost in the water for 30 minutes against Colorado before boat-racing their way past a 15-point second-half deficit for a crucial late-season triumph. Toss in three smackdowns of UCLA, by an average of 19 points for USC’s first three-win season over the Bruins since 1954, and this team did enough to raise eyebrows and put the college basketball world on notice. “When we beat Wichita State, I think that turned a lot of heads of where we’re at as a program right now,” junior guard Katin Reinhardt said. “We just kept the momentum going. Beat Arizona and beat teams that not a lot of people thought we were going to.”

Therein lies the tantalizing part for the Trojans. This season was a breath of fresh air, yet it’s not only fair, but necessary to poke holes in the campaign. Just as the Trojan football faithful expect the team to handle every Pac-12 squad not named Stanford, Oregon or UCLA, it’s reasonable to set a bar for USC’s hardwood adversaries.

Achieving the status of a perennial 9-9 squad in the Pac-12 might seem like a pipe dream after the past five years, but the upside is as scary as Chimezie Metu around the backboard. USC has the same location, education and campus perks to sell as a football program that collects four and five-star recruits the way Jordan McLaughlin does sneakers. An essay can be written debating USC Basketball’s program prestige, but a season that saw this year’s Trojans emerge into campus celebrities hammers home how success builds success.

Players win games, and USC’s reason to up the ante lies in the yearly upgrades in talent over the past two years. The Trojans aren’t going to be confused for Kentucky or Kansas, USC should return an eight-man rotation with athleticism to rival any Pac-12 foe and will enter next fall with one of the four most talented rosters in the conference. McLaughlin and Julian Jacobs are the Pac-12’s best returning backcourt, Metu and Bennie Boatwright present unique mismatches, Reinhardt and Elijah Stewart offer sharpshooting, Nikola Jovanovic presents a deft touch around the rim and Darion Clark’s hustle and strength has become the heart and soul of the team.

Another nine-win boost isn’t in the cards, but another offseason of development without having to address any major departures can only benefit a squad with four seniors and junior scholarship players apiece. 6-foot-7 guard transfer Shaqquan Aaron also enters the fray along with a pair of freshmen twos who will provide a perimeter boost on either side of the ball: Jonah Matthews with his three-point ability to go with De’Anthony Melton’s upside as a defensive stopper. 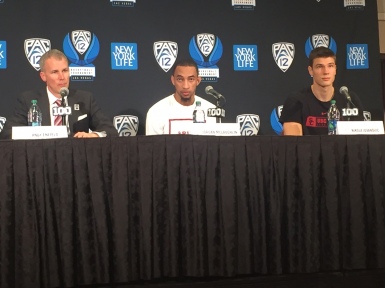 For Enfield, McLaughlin and Jovanovic, the 2015-16 season raised the bar. (Jacob Freedman/Galen Central)

So, what needs to be fixed? The late-season lull saw a spike of flat starts and the continuation of a canyon-sized gap between the Trojans’ performance on the road versus the confines of Galen. USC won their first 15 at the Galen Center and finished 16-2 at home, but won just one game outside of Los Angeles in their Pac-12 slate. “In the Pac-12, everybody has to protect their home court, and you have to steal a few on the road,” Reinhardt said on what USC needs to do to boost themselves into the upper echelon of the conference. “Games I think we really had [won] on the road this year, we just fell late.”

Enfield’s solution: The leadership of the point guards. As he addressed the road woes after the loss to Utah, he turned toward Jacobs and McLaughlin on the podium. “That comes with maturity, comes with leadership, and these two players are going to have to figure it out in the offseason how to do that.” Activity on defense as well a mental toughness from said leadership have been known to fuel quick starts, with intangibles propping up as a room for improvement.

Jordan McLaughlin will be relied upon for leadership by Enfield even more next year. (Charlie Magovern/Galen Central)

The Trojans’ sole focus will be on Selection Sunday and whatever form of postseason follows, but a Thursday exit doesn’t diminish that the stakes have been raised. “With the core guys coming back, we definitely think we’ll be up there in the Pac-12 next year,” said Boatwright, reflecting the new upside for the program.

“If we improve our decision-making on offense and just being tougher on defense,” added Metu on USC’s offseason goals, “I feel like we could have a really good chance at winning the entire thing next year.”

2 thoughts on “For USC, 21-Win Season Shows Sky Is The Limit”