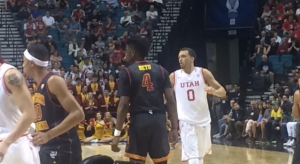 The Trojans competed hard, no doubt. There were two major reasons, however, why they fell short. The team simply had no answer for the incredible shooting by the Utes. And Utah did have an answer for USC’s electric transition offense.

The biggest advantage the Utes have over opposing teams is their fantastic center Jakob Poeltl. It doesn’t help that USC, like most college basketball teams, is lacking a player that can even somewhat contain Poeltl one on one.

In their first matchup this season, Poeltl scored 29 points and had 13 rebounds. The most impressive part? He did it on 11-13 shooting.

So you may think the easy solution here is doubling him in the post. Except he’s an excellent passer as well. Poeltl does a really good job of finding the open man out of double teams.

“Offensively, he’s really effective,” Nikola Jovanovic said. “Compared to last game, we did a really good job guarding him. He didn’t hurt us as much as he did last game. We kinda stopped him, but the other guys, they made so many tough shots toward the end, and I think that was the key to the game.”

Poeltl “only” had 14 points on 5-7 shooting, but he added four assists. The Utes consistently had much easier shots than USC did because of how much attention Poeltl was commanding.

Kyle Kuzma scored 23 points on 11-12 shooting. Lorenzo Bonam was perfect from the floor, making all five of his shots. Kuzma in particular was key in a crucial stretch in the first 20 minutes of the game, when the Utes made 12 of their final 13 shots to go into halftime.

Utah as a team shot 10-22 from three-point land, including the two biggest shots of the game.

USC had cut Utah’s double-digit lead to two points with just over three minutes remaining. Big man Chimezie Metu made a freshman mistake, leaving Kuzma a little too much room to give the Utes a five-point cushion.

After a Jovanovic layup made it a one-possession game again and with the shot clock winding down, Utah senior guard Brendon Taylor channeled his inner Steph Curry, launching a deep three that seemed to deflate the Trojans.

“We were a little unlucky,” USC coach Andy Enfield said. “Give them credit. Their players, like Kuzma, stepped up and had a big game against us, and that’s what happens. You try to take something away or maybe their first or second option, and if the third or fourth option beats you, then you lose.”

Overall the Utes shot 60.8 percent from the floor in the game. Considering USC only shot the ball at a 44.1 percent clip, it was somewhat surprising that the Trojans only lost by eight. Well that, and USC’s inability to push the pace.

The Disappearance Of USC’s Transition Offense

When USC is at its best, it has a lot of easy scoring chances. And the team generates those opportunities by getting out in transition early and often.

That was not the case tonight.

The easy thing to say regarding this is that the Trojans had two fast-break points. In the entire game. Two.

“Well, I’m sure a major part of their scouting report was to stop our transition game,” Julian Jacobs said. “That’s something we thrive off of. A lot of credit goes to them. They’re a mature basketball team.”

Give Larry Krystkowiak and the Utah coaching staff credit, they came up with an effective plan that USC did not adjust to.

“They did a good job sending two guys back every single time,” Katin Reinhardt said. “And then their third guy who usually goes for the boards was halfway. If they saw we were getting a rebound, all three would get back. They were making sure that we didn’t get anything going to the basket. They did a good job, a really good job.”

USC solely had to rely on its half-court offense. The only way the Trojans can win with that approach is if they hit their threes. Reinhardt (three) was the only USC player with multiple shots from beyond the arc. The other players shot only 4-12 from three, including Bennie Boatwright, who followed his dominant performance vs. UCLA by making only one of his four three-point attempts.

And one of the rare times the Trojans had a transition opportunity Thursday night, it led to the biggest swing of the game.

At the 14-minute mark in the second half, it was clear that USC was cutting into the big deficit. A Metu layup after beating Poeltl in the post cut Utah’s lead to 51-45. Kuzma turned the ball over, and USC was on the break.

While a Ute did go up with him, this was a layup that Jordan McLaughlin has made hundreds of times in his life. This time, it didn’t go in. Utah’s Jordan Loveridge then hit a three on the other end, turning a potential four-point deficit into a nine-point one.

“We had a chance to win the game down the stretch. So I look at the game as a whole, we gave ourselves a chance,” Enfield said. “We were one or two possessions away from beating a top-10 team in the country.”

1. Despite the loss, Enfield doesn’t think this will be his team’s final game this season.

“With our strength of schedule and how many top-100 wins we have, I think there is no question that we deserve to be in the tournament,” Enfield explained. “I certainly wouldn’t want to play us. We’ve very streaky and explosive, as you saw the last two games.”

2. Ball movement played a role in tonight’s result as well. While USC did only have five turnovers, it also had a rather-low nine assists. Utah, on the other hand, had 22 assists, one helper short of tying the Pac-12 tournament record.

3. Despite what the final score indicates, this was a very competitive game. There were more lead changes in this game alone (14) than in the first six games of the Pac-12 tournament (nine).

4. McLaughlin’s 24 points were a game-high, and the second-highest total in the Pac-12 tournament thus far. Washington freshman Dejounte Murray scored 25 on Wednesday against Stanford.