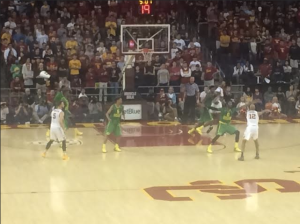 In a wonky Saturday afternoon that featured a power outage at the Galen Center, USC was tripped up in its final game of the regular season after losing 76-66 to Oregon.

While it’s difficult to end the regular season with a loss at home, you still can’t discount what USC accomplished in the regular season. Going from 20 losses last year to 20 wins this campaign is a remarkable improvement, and finishing 9-9 in one of the toughest conferences in the country was a big step in the Andy Enfield era.

“Our players competed and played hard today,” Enfield said. “They just didn’t play well enough to beat a good team. We were close, but we didn’t get it done.”

To beat a prolific team like Oregon, baskets have to be made early and often. Unfortunately, the Trojans had one of their worst shooting performances of the season.

USC made only four of its 19 three-point attempts, and missed 10 of its 28 shots from the free-throw line. All of those missed opportunities burned the Trojans badly in this 10-point defeat.

“Down the stretch in the last five minutes, it was a one-possession game,” Enfield said. “And we had a chance to win the game. But we didn’t make any shots. We missed floaters, we missed layups, we missed wide-open threes, we missed free throws. Against a good team like Oregon, our defense was good enough to win this game. But you have to play on both ends.”

To make matters worse, the Trojans also struggled getting shots near the rim, especially in the second half. While USC’s defense was a lot more active in the final 20 minutes, as evidenced by Oregon shooting 36.7 percent from the floor over that span, the offense couldn’t match that effectiveness.

Nikola Jovanovic was tied for the most points on the team with 12, but only attempted four shots from the field. Julian Jacobs missed six of his eight two-point attempts. The Trojans overall shot 35.7 percent from the field in the second half, burying a golden opportunity to pick up a seed-altering (for both the Pac-12 and NCAA tournaments) win.

“Around the rim, [Oregon’s length] was certainly a factor. We have length, they have length. Both teams missed a lot of shots down the rim. Anytime you have long teams, you guards flipped shots over bigger guys, and it’s hard to make those shots.”

One Thing I Liked: Strahinja Gavrilovic

USC’s only senior this season is Strahinja Gavrilovic, but he hadn’t gotten a lot of playing time heading into this game. After a nice pregame ceremony, Gavrilovic got his first start of the season on Senior Day.

He led the Trojans out of the tunnel, and the team seemed to rally around the senior’s court presence early on.

Gavrilovic made a layup for the first points of the game, and added two free throws to give USC a quick 4-0 lead. He was subbed out three minutes in and received a nice ovation from the Galen Center faithful.

“Strahinja played awesome,” Enfield said. “He’s one of the hardest-working players I’ve ever coached. He played great tonight. I’m very happy for him.”

The Trojans led for the first eight and a half minutes of the game, and you could see Gavrilovic smile from the bench. The players played with a very high energy early on, and clearly wanted to win one final game at home for him. Even with his limited role this season, he’s still made an impact on his teammates.

“It was really emotional,” fellow Serbian Nikola Jovanovic said. “We were out there for him. He’s a great guy. I learned a lot from him. He’ll be a friend for life.”

This may not be the last time USC fans see him on the court this season, though.

“I feel comfortable, if we need him down the stretch here in the postseason, we can put him in. He played really well today,” Enfield said.