From Istanbul To Iowa: Alex Stepheson’s Long Journey To The NBA

Imagine living on the Mediterranean Coast, with the Acropolis and ancient beauty of Greece just miles away. How about a nation of serene, picture-perfect waterfalls or in the city that merged Europe and Asia in a culture renaissance? Instead, Alex Stepheson ended up in Iowa. Smart move. Seriously. After earning a D-League All-Star nod this season playing for the Iowa Energy, where he averaged 15.9 points and 13.8 rebounds in 31 games, the Los Angeles native and former USC forward in now playing on his profession’s brightest stage for his hometown team after being signed to a 10-day contract by the Los Angeles Clippers last week.

His opportunity came partially out of the Clippers’ need for big man depth after a hand injury to occasional Galen Center courtside guest Blake Griffin. For the Los Angeles native, it’s a perfect storm. “An opportunity to showcase myself anywhere in the NBA would have been great,” Stepheson said before the Clippers’ eventual loss to the Denver Nuggets on Wednesday. “But to be able to do it while I’m in Los Angeles… it’s a dream to be here.” 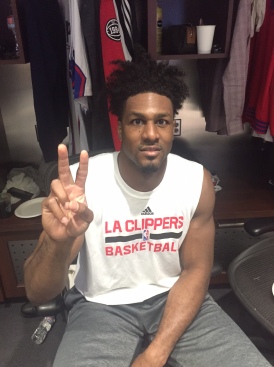 Born and raised in Southern California, the past week is a decade in the making for the 28-year-old that starred at Harvard-Westlake. Stepheson played two seasons at North Carolina, then a pair with the Trojans before jettisoning off to Europe after going undrafted in 2011 with the NBA mired in a lockout. He had preseason cups of coffee with the Mavericks and Grizzlies the past two seasons, but last Saturday night’s game against the Warriors marked the first time he stepped on the court for some real-deal NBA action. Two nights later, he notched his first NBA points on a tip-in while playing seven minutes against the Phoenix Suns. Playing in front of a swarm of family and friends, the homecoming was a success in Stepheson’s eyes.

A specialized player with specific NBA-level skills, the 6-foot-10 Stepheson isn’t about to blow anyone away with his ball handling or jump shot. Instead, the muscular forward gets by with a voracious appetite on the boards – he led the D-League in rebounding at the time of his call-up – and an Energizer Bunny-like tenacity on defense taught to him by none other than former USC head coach Kevin O’Neill. “He was a stickler for the details of the game, especially on the defensive end,” Stepheson said on O’Neill, whose three-and a-half year tenure at USC included both of Stepheson’s years on the court. “Defensively, I’m able to pick up things and learn pretty quickly because of Coach O’Neill.”

Stepheson knows he’s back in Los Angeles at the perfect time. Although this year’s USC Basketball squad led by Andy Enfield appears set to make the NCAA Tournament for the first time since Stepheson’s final year in Troy, he’s not quite ready to take credit for the Trojan resurgence in Los Angeles. “It’s a weird coincidence,” he said, cracking a laugh. “I’m not going to say it’s good luck, it’s just good timing.”

Enfield’s mad-dash playing mantra is about as similar to O’Neill’s style as Iowa is to Istanbul, but that doesn’t mean Stepheson’s isn’t enamored with this year’s Trojans squad. “I saw them sweep UCLA, so that’s always a successful year in my book no matter what,” he exclaimed, smiling broadly. “I’m pretty sure they can make a little run if they reach the tournament. They can get in there and make some noise.” 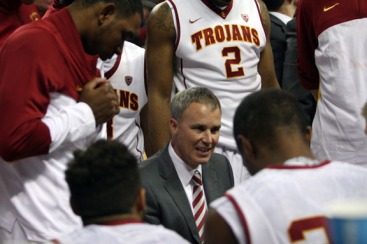 Stepheson has faith in the program Andy Enfield is building (Seth Rubinroit/Galen Central).

Stepheson isn’t afraid to show support for the alma mater, attending last Sunday’s game against Utah as well mentioning how he’d like to hopefully ‘kick it’ with the players later this spring. He wouldn’t quite admit that he would have preferred the current tempo over the grit-and-grind times under O’Neill, but Stepheson is excited where the program is going with Enfield and the consistency the coach has brought the program three years in.

Stepheson’s own time at USC proved to be one of the few constants floating among a sea of change, but it wasn’t without a litany of obstacles at the beginning. He played two years at North Carolina out of high school, but transferred home due to a family issue. However, the NCAA denied his transfer waiver. As he watched his former Tar Heel teammates win the NCAA Tournament and USC make the Round of 32, Stepheson stewed. “I was playing well in practice, so not having a chance to play was just eating away at me,” he said. Yet, then-coach Tim Floyd instilled a mantra in Stepheson that the forward still has not forgotten. “Coach Floyd sat me down and taught me that it’s better to be prepared for the opportunity and not have one, than to not be prepared when I have the opportunity.”

That opportunity came the next year, but not before a tidal wave hit the program. After allegations surfaced that Floyd gave money to a middleman who helped send 5-star commit O.J. Mayo to USC, the head coach resigned a month later. Gone was not only the coach that Stepheson had spent an arduous year waiting to play for, but also USC’s five-man recruiting class that included future first-round picks Derrick Williams and Solomon Hill.

The ensuing talent drain, including the loss of DeMar DeRozan to the NBA Draft, gave Stepheson a golden opportunity. He started 26 of 28 games in the 2009-10 campaign, averaging 8.4 points and 7.2 rebounds as well as finishing second in the Pac-10 in blocks. The team finished 16-14 and missed the NCAA Tournament for the first time in four years, but Stepheson’s senior year saw a return to the Big Dance while he averaged 9.8 points and 9.2 rebounds.

While O’Neill’s blunt and cuss-laden coaching style drew many USC players out of the program, Stepheson soaked it in. “KO’s my guy,” he chuckled recalling his fiery coach. Stepheson’s father might have shocked by O’Neill’s penchant for dirty language, but the son stood in his coach’s corner. “KO was a good guy with a bad mouth. He really carried my game to where it is,” he said.

Stepheson never got the chance to play for Tim Floyd at USC.

Stepheson’s Trojan career ended with a quiet Wednesday night loss in the First Four to eventual Final Four squad VCU, with Stepheson notching four points, 10 rebounds and four blocks. It would be his final game on American soil for more than three years. “USC was good to me,” Stepheson said about his three years on campus. For him, the best part of the experience came on the day of graduation, where he received his diploma in front of family and friends. The second-best? The 9-0, a popular USC bar on Figueroa. “I gotta [sic] try to cut out all my memories there,” Stepheson sighed wistfully.

With the 2011 NBA lockout also shutting down training camps and the D-League, Stepheson had no choice but to head overseas after going underrated that June. He excelled for Panionios in the Greek League in 2011, but bad luck struck again when he blew out his knee in the playoffs. Stepheson missed the first two games with USC in 2009-10 due to his knee injury, but had never faced on-court adversity like this. “After the shock and the surgery, I just had a moment of ‘is basketball still in the book?” he said. “You’re coming from injury and unsure of where you’re going to go.”

For the relentless competitor, the next move came as a surprise. Instead of returning the next season, Stepheson instead adjusted his eating and sleeping habits to fine-tune himself to come back at full strength in 2013.

It worked. Stepheson played a season in Slovenia with Union Olimpija, and then played in the NBA Summer League with the Kings before playing for Istanbul BB in Turkey last year. Yet, at 27 years old, Stepheson knew his NBA chance dwindled every season he spent halfway across the world. This past summer, he told himself Europe was off the table, and that he had to take himself where he wanted to be: the NBA. “I had to put all my eggs in one basket,” he said.

He played preseason with the Grizzlies, and then was assigned to the team’s D-League team in Iowa under the tutelage of head coach Bob Donewald, Jr. A man among boys, he embraced the high-paced D-League style to the point where the matter of a call-up became a matter of when, not if. Clippers head coach Doc Rivers took the plunge, praising Stepheson for being a big man playing with energy. After receiving encouraging words from Bryce DeJean-Jones when the former USC guard was signed by the Pelicans in January, it was his turn.

Almost five years after graduating from USC, the bulky, jumpy big man was finally in the NBA. And although his 10-day contract has seen him connect on more high-fives than dunks on the court, Stepheson knows he’s come a long way from his time stomping up and down the Galen Center. Even if he’s playing just two miles away.

MORE: Catching up with Byron Wesley

Bear Attack: Trojans Clawed in Bay »
« Marshall’s Mindset: Seven Things USC Must Do To Get Back On Track