After USC’s upset against No. 7 Arizona on Saturday night, it’s time to admit that Andy Enfield’s team is for real.

The Trojans already have more wins this season (14) than last season (12). USC has jumped out to a 3-1 start in Pac-12 play, and have held double-digit leads in all four games. And there’s a decent chance the team will be ranked in its crosstown showdown this upcoming Wednesday against UCLA at Pauley Pavilion.

USC clearly has the most talent it has ever had in the Enfield era, but why have the Trojans been playing so much better in the 2015-16 campaign? Besides more talent, there are three main reasons.

In basketball, the two ideal places to shoot are near the rim and from beyond the three-point line. Midrange jumpers are viewed as the least effective shot a player can take. 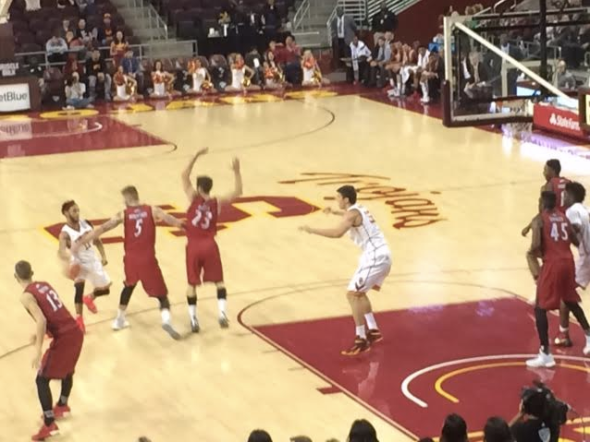 Despite shooting almost four percent better from three (32.9 percent) in Enfield’s second season than first (29.1), USC’s adjusted offensive efficiency (via KenPom) dropped from 101.9 to 98.7 because it was taking more midrange jump shots at the expense of shots at the rim.

While this year’s team has been taking a similar percentage of shots at the rim (41.7) compared to last season, USC’s offensive adjusted efficiency (111.6 via KenPom) is by far the highest it has been under Enfield.

While USC’s point per shot (1.3) isn’t among college basketball’s elite in that statistic, it’s a huge increase from last season (1.15). Improvement in that metric is especially important because USC has led the Pac-12 (and has ranked in the top 30 in CBB) in possessions per game in all three seasons under Enfield. More possessions leads to more shots. Add in more efficient shooting, and that’s how USC’s offense has improved so dramatically.

Bennie Boatwright is arguably the biggest factor for USC’s offensive shift. The freshman forward is the first stretch four that truly fits Enfield’s system. 58.5 percent of his shots come from three-point land, and another 23.1 percent of shots come at the rim.

Since he shoots such a low percentage of midrange jumpers (18.4 percent), it makes him one of the most efficient shooters based on eFG% (effective field goal percentage or (FG + 0.5 * 3P)/FGA, a statistic that accounts for the fact that threes are worth more than twos). That’s despite having the worst shooting percentage of any USC player averaging at least 10 minutes per game. And since he’s a true freshman, it’s reasonable to think that his shooting numbers will only go up from here in the next couple of seasons, making him such a dynamic offensive weapon for the Trojans.

The player who has made the biggest strides on offense has been Jordan McLaughlin, especially his shooting numbers from the two key areas of the court (at the rim and from three). McLaughlin is shooting 71.1 percent at the rim this season (WAY up from 48.2 percent last season) and 44.6 percent from three (compared to 27.2 percent last season). Since McLaughlin touches the ball more than anyone else on offense, his drastically improved shooting has been another big factor.

While many are ogling about USC’s high-scoring offense this season, the team’s defense may be even better. On the surface, opponents are shooting 37.9 percent against the Trojans, which is tied for 17th-best in all of college basketball (second-best in the Pac-12, only behind Cal).

In almost all cases, the area on the court where teams take their highest percentage of shots is at the rim. Attempts at the rim have been the most popular shot against USC in all three seasons under Enfield.

USC’s improved interior defense is in large part due to the team’s uncanny knack of blocking shots. The Trojans are second in the country in blocks per game (6.76), and 16th in block percentage (15.0 percent of opponent’s two-point shots blocked). USC’s block percentage of shots at the rim is 17.7 percent, a huge increase from the 12.6 percent mark the team posted last season in those situations.

I’m sure you can probably guess which player has had the biggest impact for that change: USC’s other true freshman Chimezie Metu.

Metu’s rim-protecting abilities have been absolutely sensational this season. The Trojans haven’t had a player affect opponent’s shots like he has in a long time.

His block percentage (blocks over two-point shot attempts while a player is on the floor) is 9.97, which is good for 27th in the country. That number is scary good for a guy who has played fewer than 20 career college basketball games. Nikola Jovanovic’s block percentage has improved from last season to, increasing from 2.8 to 4.2.

USC’s newfound defensive interior presence has forced opponents to take more shots away from the rim. After teams shot 40.9 percent of their shots from point-blank range against the Trojans last season, that number has dropped to 38.3 percent during this campaign.

The defense has allowed opponents to also take a higher percentage of midrange jumpers (27.5 percent of offensive possessions in 2015-16, 23.8 percent in 2014-15). So while the offense has been more efficient, USC’s defense has caused opponents to become less efficient shooting the ball.

Not only have the Trojans been playing strong defense, they’ve been doing so without fouling very much. USC is the best team in the country in blocks per fouls, accumulating a 0.39 ratio this season. That ratio was only 0.24 last year, which was tied for 81st in college basketball.

Considering USC isn’t a very deep team, keeping its players out of foul trouble is extremely important when facing top competition. In the quadruple overtime win against Arizona, zero Trojans fouled out. Only one player, Bennie Boatwright, had four fouls, and he played 41 minutes.

In that game, USC picked up 20 fouls versus swatting 10 shots (0.5 blocks per foul ratio). In keeping up with the common theme this season, the Trojans were able to play good defense without fouling, so that their top players can play the big minutes late in games.

USC has always played with a fast pace under Enfield, which would lead you to assume that the team scores a lot of points in transition. That really hasn’t been the case.

In Enfield’s first two seasons, less than 30 percent of USC’s shots came within the first 10 seconds of the shot clock (29.7 percent last year, 29.5 two seasons ago). This season, that metric has jumped all the way up to 32.8 percent.

If you’re wondering why this is important, look at the shots USC is getting in possessions that have lasted 10 or fewer seconds (the best way to measure transition offense). 47.7 percent of the team’s shots come at the rim in “transition” situations, and the team is shooting 60.0 percent at the rim. USC’s overall offensive numbers are 41.7 percent of shots taken are at the rim, with a 57.8 shooting percentage on those attempts.

The increase of shots at the rim (along with the percentage) is why USC’s eFG% is higher in “transition” situations than possessions taking 11 to 30 seconds. It makes sense, transition opportunities usually lead to easier attempts.

Now, USC is a team that does not rack up too many steals, which is one way to generate transition opportunities.

The Trojans have actually been generating most of their improved transition offense through rebounds.

A whopping 61 percent of USC’s points within the first 10 seconds of the shot clock have come after a defensive rebound. That number is so high mostly due to the increased amount of blocks, since players get a defensive rebound if they grab the deflected block. While leaking out after “normal” defensive rebounds has helped, the Trojans have essentially treated blocked shots as their best transition opportunities this season.

USC’s current personnel is simply more adept to run in transition. Boatwright and Metu are more athletic than USC’s big men over the years (like Omar Oraby), so they are more feasible weapons on the fast break. This shows how strong Enfield’s recruiting has been since taking over as USC coach, nabbing talented players who fit his vision and scheme.

The best example of this improved transition offense was USC’s three consecutive transition baskets against Arizona State to pull away in the final minute. Considering USC’s late-game struggles so far this season in the half-court offense, this is something important to watch as the season progresses.

Big thanks to hoop-math.com and kenpom.com for many of the statistics used in this piece. All stats are updated through morning of January 10, 2016.

One thought on “Max Analysis: The Numbers Behind USC’s Dramatic Improvement”