Southern California doesn’t get a lot of rain, but the Trojans did their best part to end the drought on Thursday night by hitting 12 three-pointers in a 101-82 rout of the Cal Poly Mustangs Thursday night at the Galen Center. The Trojans let a late first-half run by the Mustangs cut a 15-point to five, but a 13-2 jolt over 2:26 at the start of the second half pushed the score to 62-46 as the Trojans never led by fewer than 12 points the rest of the way. USC shot a blistering 56.3 percent from the field, a season high, while also going 12-of-23 (52.2 percent) on three-pointers.

The biggest difference in Reinhardt’s game, however, is the shots he’s not taking. The sharpshooter went 9-of-12 on the night, but also passed up a slew of contested jumpers that he would have hoisted last season. “He’s not as emotional,” Enfield said about the Reinhardt’s improvement beyond the box score. “He’s level-headed. He keeps playing if he makes a mistake, while last year it seemed like he would get down on himself and it would kind of snowballed on him.”

In his second game replacing Elijah Stewart in the starting lineup, it looks like Reinhardt might be sticking around. He’s not complaining either: “I think it’s a little easier,” Reinhardt said following the win. “You’re coming from warm ups and get a little sweat going. When you go to tip-off, you’re already warm.” Monday night, he was red-hot, and he keeps this up, he might be too lethal a scorer to not roll out at tip-off.

Old Man Jacobs
There’s little doubt left that Julian Jacobs is the heart and soul of this Trojans team, not to mention emerging a top-shelf Pac-12 point guard. The 6-foot-4 junior out of Las Vegas tallied a career-high 13 assists, showing off his range whether it be through hitting Reinhardt in the corner for 3s or lobbing an alley-oop for the pogo stick freshman Chimezie Metu for a thunderous slam. He even passed up an open layup to dish out, earning a chuckle from Enfield in the postgame press conference.

What’s equally important is that Jacobs is a comfortable point guard on a team comfortable with its playing style. The promises of high-paced, vertical basketball that Enfield brought from Florida Gulf Coast two and a half years ago are finally bearing fruit. “Obviously we went through hell the first two years, but it’s paying off now,” Jacobs said. “Today is the first time we embodied Dunk City. From start to finish.” Enfield joked that Jacobs has “a lot more gray hair” than when he first arrived on campus, and Jacobs played the grizzled veteran role to a T on Monday night, right down to sporting the tied headband look. 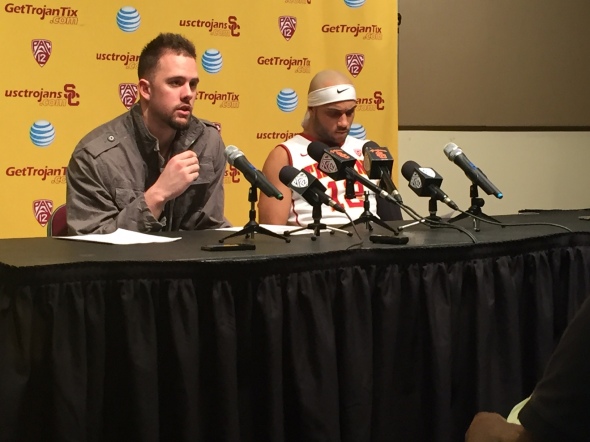 Chimezie making it easy
It seems like USC’s pair of freshman are alternating big games so far in 2015. Bennie Boatwright had 10 points of his own, but Monday belonged to Chimezie Metu. The 6-foot-11 forward had a career 16 points, showing court awareness with his cuts to the basket to get found by Jacobs for easy post buckets while even flashing his range for a pair of jumpers. His kamikaze playing style only produced one turnover as well.

This USC team is still predictable in a big way: When they cut down the turnovers, the offense is explosive enough to a lot of talented teams out of the building. Cal Poly were no slouches, but the Trojans pushed the pace and hit the long-distance shots to doom the Mustangs.

Defensive deficiencies
Lest we forget, this is still a team giving big minutes to a pair of freshmen and a sophomore (Stewart) who only started getting significant minutes at the end of last season. On defense, this means lapses from time to time. Here’s a couple of examples:

Bennie Boatwright overran his defender midway through the first half half, and the Mustangs’ Taylor Sutlive hit an open jumper. Sutlive also beat Elijah Stewart down the floor and was found for an open three, which he nailed while earning Stewart a slight chewing-out from an unenthused. Metu’s goaltend on a Mustangs floater in the closing seconds of the first half was another preventable mistake, one that cut USC’s lead to five.

Still, USC did make adjustments in the second half after the Mustangs nailed six threes in the opening 20 minutes. “We tried to run them off the lane in the second half,” Enfield said. “They got some shots in the lane then, but we were able to withstand that as we were doing well offensively.”

Keeping It 100
USC led 98-82 as the clock ticked toward the game’s end, but Malik Marquetti’s fallaway three with eight seconds left pushed the Trojans over 100 points for the second time this season, sending what was left of the Galen Center crowd into a mild frenzy.

Max Analysis: Is It Dunk City or Block City? »
« Documentary will Explore Life of Ryan Francis