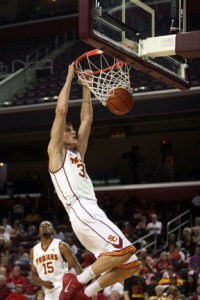 In a Sunday shootout at the Galen Center, USC beat Utah State 89-84, avenging last year’s loss to the Aggies. The 89 points were a season-high for the Trojans, and the most points the team has scored in a game since November 12, 2013 vs. Cal State Northridge. USC shot 50 percent from the floor, and made 12 of its 26 three-point attempts. The Trojans are now on a four-game winning streak, despite a monstrous 32-point outing from Utah State’s David Collette.

One Thing I Liked: Nikola Jovanovic

After a very strong summer, Jovanovic had lofty expectations coming into the season. The Serbian struggled early on, scoring fewer than 10 points in four of the first five games. But he exploded onto the scene this afternoon.

Jovanovic tied a career-high by scoring 23 points, and he did so on 9-11 shooting from the floor. He even hit his first three-point shot of the season, which broke a 76-76 tie with 3:31 left in the game. The Trojans led the rest of the game after that basket.

“It’s nothing special. I go to the gym every day trying to improve,” Jovanovic explained. “I started the season slowly, now I’m heating up and the ball is going in.”

After his slow start, Jovanovic has adjusted quite nicely into his new role over the last few games. Last season, he was used as a stretch four and lined up on the perimeter often. Now, he’s primarily positioned much closer to the basket and scores most of his points in the paint.

“Nikola has underperformed most of the season, but he has picked it up lately,” said USC coach Andy Enfield. “He had an excellent game today. I expect him to develop into something special.”

Another Thing I Liked: USC’s Decision-Making

USC had 22 assists and committed only nine turnovers against Utah State. This is the third straight game that the Trojans have had more assists than turnovers. After a whopping 56 turnovers in the first three games, USC has made much better decisions with the basketball. It’s been the key reason why USC has outscored its opponents by 37 points over the last four games.

Freshman point guard Jordan McLaughlin had 21 points. He also had five assists compared to one turnover. After posting a 1.2 assist-to-turnover ratio in the first three games, over the last six games it’s at 3.3.

“The first few games I was forcing it, playing a little too fast,” said McLaughlin. “Now I’ve been able to slow it down and play more under control. I’ve been really focusing on slowing myself down.”

USC’s two other main distributors, Julian Jacobs and Katin Reinhardt, combined for 11 assists and four turnovers. Reinhardt’s six assists were a season-high. The Trojans have been scoring more points now compared to earlier in the season because the team is putting up more shots rather than wasted possessions ending in turnovers. Let’s see if that’s a common theme throughout the season.

1. Jovanovic wasn’t the only Serbian who had a great game. Luis Gavrilovic had 13 points on 6-8 shooting. This was the first time that both Serbs scored at least 10 points in the same game for USC. Enfield said afterwards that Gavrilovic completely changed his shooting mechanics this offseason, and that it has led to him becoming a more viable offensive threat.

2. McLaughlin made five three-point shots today. As a team, USC made less than five threes in six of its first eight games.

4. Have to feel bad for anyone that bet on USC today. The Trojans closed as 6.5-point favorites, and looked like they were going to cover. Then, the team missed eight of 12 free throws in the final 70 seconds of the game. Enfield said he’s never seen a team miss six consecutive free throws until today. The point total, which was 127.5, wasn’t impacted by the charity-stripe drought. USC drops to 5-4 against the spread this season, and the OVER moves to 3-4.

5. USC’s next game is against Army this upcoming Saturday at 7 p.m. PST at the Galen Center. The Trojans will be aiming for their first five-game winning streak since the 2009-10 season.