USC ended the game on a spirited 20-11 run, but it was too little too late as the Trojans fell to Colorado Sunday night at the Galen Center, 83-74.

Missing their floor general, the Trojans had an abysmal 6-to-17 assist-to-turnover ratio. By comparison, the Buffaloes had 18 assists and 17 turnovers.

“Some of the turnovers seem to invent themselves,” Enfield said.

Bryan only found out he would make his third start of the season five minutes before the game. He had eight points, but only one assist in 20 minutes before fouling out.

“I feel like any of our guards can start,” Bryan said. “It was reassuring because I’ve been working hard.” 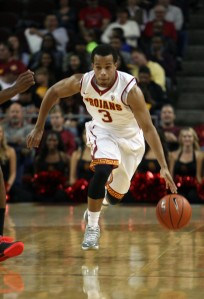 Dukes, in his second start of the season, made a three-pointer to score the first points of game. In the second half, however, J.T. Terrell started over Dukes.

Spotted in the Crowd

Incoming USC basketball players Jordan McLaughlin and Malik Marquetti were both at the Galen Center to watch the game.

Athletic director Pat Haden had fun with the Enzone before the game:

Highlight of the Night

Walk-on freshman guard Devon Pflueger made a fadeaway jumper from the free-throw line with just three seconds left in the game for his first collegiate field goal, causing the USC bench to jump up in excitement.

“Devon works really hard,” Bryan said. “To see him hit that shot was big for us.”

The Trojans will travel up north to play at Stanford on Thursday, and at Cal on Sunday. USC won its only Pac-12 game of the season at home against Cal in January, and lost to Stanford in overtime.

Nerves Not A Problem For DeMar DeRozan In First NBA All-Star Game »
« Pe’Shon Howard Does Not Play Vs. Colorado