USC handed out black shirts to students to “Black Out the Bruins.” 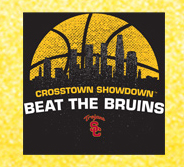 The players seemed to get the message as the Trojans shot “lights-out” in the first half, making 59.3% of their shots to go into halftime leading 41-35. Byron Wesley scored 18 of his game-high 27 points in the opening half.

“We didn’t come out after halftime with the same sense of urgency as the first half,” guard Pe’Shon Howard said.

If you just watched the first half, you would not believe UCLA obliterated USC at Pauley Pavilion, 107-73, just over a month ago.

9,216 fans packed into the Galen Center to support the Trojans Saturday night.

“We had great student and fan support,” coach Andy Enfield said. “There was a lot of energy in this building.”

The student Enzone came out in full force, including USC’s starting quarterback:

Getting hyped tonight in the student section for the USC basketball game! #FightOn #BeatTheBruins

Photo of the Night

No competition, as Nick Young (USC) and Jordan Farmar (UCLA) both brought their kids to the game:

Nick Young (left) and Jordan Farmar, who both play for the Los Angeles Lakers (Instagram: McKenna_Keil)

In Return To LA, DeRozan Reflects On How Far He Has Come »
« USC Managers Down UCLA In Thriller