USC’s DeMar DeRozan, an All-Star for the Toronto Raptors, was in town last night to play the Los Angeles Clippers. A recap of the game, in which DeRozan exploded for 36 points, follows. Check back Monday for longer profile on DeRozan and his success this season, with quotes from Russell Simon’s interview with DeRozan at Staples Center.

Clippers forward Blake Griffin and Raptors guard DeMar DeRozan will face off again next weekend in New Orleans, where both players will be representing their conferences in the NBA All-Star game. However, it will be hard for either player to replicate their performance tonight next week in the Big Easy. The two All-Stars matched each other shot for shot, as they each scored 36 points in the Clippers’ 118-105 victory. 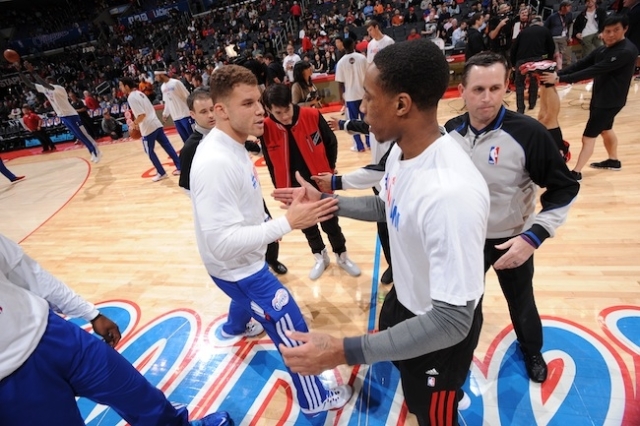 “I expected greatness and he has done some things that we didn’t know he could do as well, and clearly we are taking advantage of him,” Clippers coach Doc Rivers told the media following the win.

It was an all-around dominant game for Griffin, who has become the de facto No. 1 option for Los Angeles with Chris Paul sidelined with a right shoulder injury. Griffin exploded out of the gate, scoring 19 of his team-high 36 points in the first quarter. He also added eight rebounds and two assists. Griffin became the first Clipper since World B. Free in 1979 to score at least 36 points in three straight games. Griffin had 43 in the Clippers Wednesday loss to Miami and 36 in a Monday win over Denver.

With Griffin riding high coming into tonight’s game, Raptors coach Dwane Casey said prior to the game that he would try and slow Griffin down by double teaming him in the post, especially early. That did not happen, as Griffin was left alone in the post for much of his dominant first quarter, where he toyed with Jonas Valanciunas, hitting him with a bevy of sky hooks and using his quickness to get to the hoop for emphatic dunks. The Clippers led 29-22 after the end of the first quarter.

“I still have a long way to go,” Valanciunas said after the game. “I still need to learn a lot of things and work hard and do the little things to get better.”

One player who does not have a long way to go is DeMar DeRozan. The former USC Trojan is the first USC grad to be named to an All Star team in 31 years, and played another stand-out game tonight. DeRozan matched Griffin’s point total with 36, and also added eight rebounds and five assists. He also went 17 for 19 from the free throw line, and was fouled multiple times by Griffin, who picked up his fifth foul midway through the third quarter.

“You can’t give them any leeway,” DeRozan said as he iced his legs in a cold tub following the game. “You have to fight with them to the end and keep it close.”

The Raptors tried to keep it close by resorting to the hack a Shaq strategy on DeAndre Jordan when Toronto trailed by 18 points midway through the third quarter. The Raptors took to fouling the career 42.7% free throw shooter repeatedly as the 19,000 in attendance groaned throughout a borderline unwatchable 41-minute quarter. Jordan took 22 free throws in the game and converted a career high 10 of them. He voiced his displeasure with the strategy following the game when he said “I don’t really like it, but I’m going to go up there and practice my free throws and that fine too. I feel like it’s boring for the fans to watch.”

The Raptors did pull within nine points following the final foul on Jordan, after trailing by double digits for much of the game. Willie Green scored 10 points in the first four minutes of the final quarter to stretch the lead back up to 15, and end any potential Raptors comeback. DeAndre Jordan added 18 points and 13 rebounds and Jamal Crawford scored 21 points in the Clippers’ sixth win since Chris Paul was sidelined with a shoulder injury on January 3rd.

With the win the Clippers improve to 35-18, and are now tied in the win column with Portland. The Raptors remain in first place in the Atlantic, and now they can begin to set their sights on next weekend’s festivities.

“I’m excited just to be a part of it,” DeRozan said. “Not everybody gets the chance to be an All Star in their career so it is definitely big.”

USC Managers Down UCLA In Thriller »
« Free Shirts for Students at USC Basketball vs. UCLA

One thought on “Griffin Tops DeRozan As Clippers Cruise”