USC Comes Up Short Against No. 1 Arizona

In the words of John Wooden, “All of life is peaks and valleys. Don’t let the peaks get too high or the valleys too low.”

The valleys seemed pretty low when the USC lost by 34 points at UCLA and then struggled again against Arizona State Thursday.

The peaks seemed pretty high when the Trojans held the lead late in the first half against the No. 1 team in the country, Arizona, reminiscent of last season’s upset. 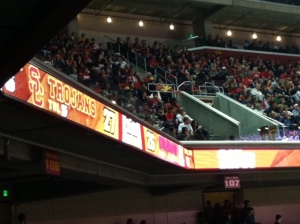 Photo evidence that USC held the lead against the No. 1 team in the nation, Arizona, late in the first half.

Ultimately the Trojans finished just below sea level, falling to Arizona, 73-53, Sunday night in front of an energetic crowd at the Galen Center.

Whatever you call him, Gavrilovic made a name for himself Sunday, scoring more points (10) than he scored all season entering the night (6 total points).

“He is probably the hardest playing guy on our team,” coach Andy Enfield said. “If he keeps giving us energy and leadership, he will play more minutes.”

“I used my chance and tried to play aggressively,” Gavrilovic said. “I have been practicing really hard to show coach I can help this team win.”

With Gavrilovic playing so well off the bench, D.J. Haley only recorded two minutes, all in the first half.

Center Omar Oraby struggled once again offensively with 7-footer Kaleb Tarczewski guarding him. He finished with two points, and only has 13 total points in the first three Pac-12 games.

“We got him the ball a couple of times tonight,” Enfield said. “He needs to convert when we get him the ball.”

Enfield on Playing Zone Against Zona

Enfield summed up the team’s defense quite well:

“You either play man or zone,” he said. “We played a little bit of both tonight, and I thought our zone was very effective.

“If you look at their statistics, only two players had made threes in their first three Pac-12 games: Gabe York and Nick Johnson. We thought, ‘Hey, lets let them beat us from the outside and protect the lane.’ We did a heck of a job in the first half, other than [T.J.] McConnell got hot.”

J.T. Terrell (13 minutes) and Kahlil Dukes (2 minutes) made appearances, while Chass Bryan and Roschon Prince were both DNP-CDs.

Enfield singled out Jacobs for his play against Arizona. The freshman had nine points to go along with four assists, four steals and two turnovers.

“Julian keeps getting better,” Enfield said. “He has struggled with his turnovers the last couple of games, but he played a much better floor game today.”

8,347 fans packed into the Galen Center, easily the largest crowd of the season. Many of the fans supported the Wildcats, but the USC student section also showed up in force on the last day of winter break.

“It is a lot of fun to play in this type of atmosphere,” Enfield said. “Hopefully as we keep getting better and better, we will have more crowds like this.”

The Trojans seemed to feed off the crowd’s energy, especially in the first half.

“If we play with a defensive effort like that,” Howard said, “we will be in every Pac-12 game.”

Two Los Angeles Lakers showed up to support their teams. Nick Young (USC) and Jordan Hill (Arizona) sat next to each other under the basket by the USC student section. On the other side, Luke Walton (Arizona) and Matt Leinart (USC) took in the action. In addition, Lakers general manager Mitch Kupchak was in attendance scouting the game.

Commit Malik Marquetti was also at the game:

USC travels to play at Utah Thursday at 7 PM, and then at Colorado Saturday morning at 11 AM.

No. 1 Arizona vs. USC Basketball Highlights »
« USC vs. Arizona Preview

One thought on “USC Comes Up Short Against No. 1 Arizona”