CLICK HERE for tickets below face value to USC basketball and football games from our friends at ScoreBig. 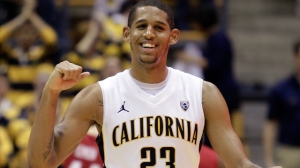 Mike Montgomery. The former Golden State Warriors head coach has led Cal to some of its best seasons ever since he took over five years ago. Cal has played in the postseason in all five years Montgomery has coached, and they have made it to the NCAA tournament three times during that stretch. Cal won their first conference championship in fifty years in 2010, and Montgomery was rewarded with a contract extension prior to last season. Last year, Cal received an at large bid to the NCAA tournament, and they beat UNLV before losing to Final Four bound Syracuse in the third round.

The loss of Crabbe, the Pac-12 player of the year last season, is definitely a big one for Cal. Crabbe was an absolute monster last season, especially from behind the arc, where he shot 35%. He went pro after this year and was drafted by the Portland Trail Blazers, and it will be interesting to see how Cal adjusts without him.

The 6-foot 6-guard has the physical attributes of Allen Craig and will be expected to play a big role on this years team. The four star recruit was ranked second in California in the recruiting class of 2013, according to the ESPN 100.

Matthews shunned USC to head North to Berkely. He brings with him a solid jump shot and will have plenty of time to develop given how much depth Cal has at guard this season. According to Rivals.com Matthews was the 20th best shooting guard in the class of 2013.

Cal won both matchups, beating USC at the Galen Center 72-64 and 76-68 when the Trojans traveled up to Berkley. The Trojans actually were up by 15 in the second half of their game in Berkley, but Allen Crabbe took over in the second half and led the Bears to a comeback.

This Year Vs. USC

Cal travels to the Galen Center on January 23rd four days before they take on UCLA. They face the Trojans again a month later, when USC finishes a two game northern California road trip  with games against first Stanford, then Cal.

While losing Allen Crabbe may hurt Cal’s chances when the NCAA tournament rolls around, it should not hurt them that badly in Pac 12 play. Cal has a great recruit to develop in Jabari Bird, and enough veteran leadership that this team should yet again be fighting for a bid in the NCAA tourney. They transformed themselves defensively at the tail end of last season, and if they can build on that, they should once again be a major threat in the Pac 12.