Three prominent Class of 2014 targets–Stanley Johnson, Jordan McLaughlin and Jabari Craig–attended the USC football game against Washington State on Saturday, along with Mater Dei wings Rex Pflueger and Mario Soto. All of the targets had the opportunity to walk the sidelines before kick-off and take pictures with the Song Girls.

USC basketball targets pose with the Song Girls on the sidelines before the football game against Washington State. (Jacob Freedman/Galen Central)

Johnson, the No. 1 player in California according to ESPN, entered the Coliseum with former Mater Dei teammate and current USC guard Katin Reinhardt. 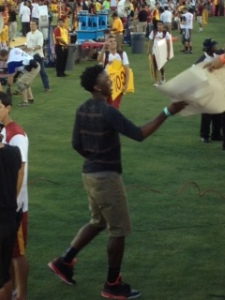 Johnson is no stranger to USC. He participated in USC’s Elite Camp in June, and is scheduled to visit USC again September 20.

McLaughlin is one of the top guard prospects on the West Coast. The 6-foot point guard from Etiwanda High School plays an uptempo style of basketball that would fit well in coach Andy Enfield’s system. He reportedly narrowed his list to four schools: Kansas, Indiana, USC and UCLA.

It would have been difficult to miss the 6-foot-11 Craig as he strolled through McCarthy Quad in a bright red shirt on his way from the Galen Center to the Coliseum. Craig, a native of Toronto who is attending Fishburne Military School in Virginia, is a center, which is a position of need for USC since Omar Oraby and D.J. Haley are both seniors.

Rex Pflueger is the younger brother of incoming USC forward Devon Pflueger. The Class of 2015 shooting guard is known for his athleticism, as one of his dunks made the SportsCenter Top 10 this summer.

Soto, a 6-foot-6 Class of 2014 small forward, is ranked by ESPN as the No. 45 player in California and is known for his physical defense.

The result on the field was not ideal, as USC fell to Washington State, 10-7. Johnson, however, had the right attitude about the game.