By The Galen Central Team 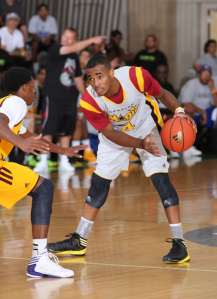 Here is our second bi-weekly mailbag in which we will answer any questions regarding USC basketball. Want your question to be answered in the next one? Email galencentralblog@gmail.com, and we’ll be happy to help! Here was our first mailbag if you never got the chance to read it.

Below are the questions that we’ll be answering this week. Don’t be discouraged if your questions aren’t in this mailbag; we simply can’t answer every email we receive. However, your question can still be posted in a future article.

Who do you think will start at the four, joining Pe’Shon Howard, J.T. Terrell, Byron Wesley and Omar Oraby in the starting lineup? (Aaron B)

Even though he doesn’t have a lot of experience and will need to show improvements in practice, we like Strahinja Gavrilovic to start the season at power forward. Coach Andy Enfield told us that he wants to have four perimeter guys and one big man on the floor. Gavrilovic has a strong outside shot and has good length.

We wouldn’t be surprised, however, if Roschon Prince overtakes Gavrilovic’s starting lineup spot in the middle of the season. Prince was USC’s highest rated recruit in their 2013 class, and certainly has the potential to make an impact in his freshman year. His game is different from Gavrilovic’s though as Prince is more of a slasher and relies more on his athleticism.

Does the news that Stanley Johnson and Justice Winslow want to play together in college hurt USC’s chances of landing Johnson? Winslow is rumored to favor Arizona & Kentucky, who many saw as SC’s biggest rivals for Johnson’s signature. (David J)

While the Winslow news doesn’t help, it’s easy to argue that USC landing Katin Reinhardt can make a huge impact for Stanley’s decision as well. The two played together at Mater Dei and they are close friends. Johnson knows that his college choice has a lot of sway on others’ college decisions, but it’s still believed that Arizona, Kentucky and USC are his top choices, and Winslow is not as highly-regarded as Stanley.

What hours are set aside for players to attend classes and which are available for practices throughout the season? Has Coach Andy Enfield indicated if he is an early morning or late afternoon practice guy? (John E)

The official practice times are not yet confirmed, but a university representative told us that they most likely will be in the mornings. We’re not yet sure about times set aside for studying, but the athletic department coordinates the schedules every year to reduce class time missed due to sports.

Where do you see us finishing this season in the Pac-12? (Norman K)

When we interviewed college basketball expert Jon Rothstein, he predicted USC would finish last in the Pac-12. We’re a little more optimistic than that, however. We think that USC has more talent on paper than Utah and Oregon State (Oregon State’s suspended players doesn’t help them either). We will have a better grasp of how the team looks once practices officially begin on September 27, but we expect the Trojans will finish in the middle of the Pac-12 standings in the first season under coach Andy Enfield. It should be noted that the Pac-12 is very deep this year and our preseason expectations are that seven to eight teams will make the NCAA Tournament.

Thanks to everyone who submitted us questions for our first mailbag. We will try and answer   as many as we can. Remember, if you want your question answered in our next bi-weekly mailbag, email galencentralblog@gmail.com.