I was travelling on the Metro Expo Line when I noticed an advertisement featuring Percy Romeo Miller as an endorser for ICDC College. 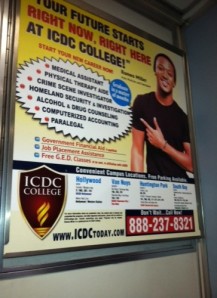 Yes, the same Percy Romeo Miller who played basketball for USC and likely earned the distinction of being the most famous bench warmer in college basketball history.

You might remember Miller better by his former stage name, Lil’ Romeo. Miller, the son of rapper Master P, launched a successful musical career of his own with hits like “My Baby.”

Miller also played basketball at Beverly Hill High (Calif.). But more importantly, he was the best friend of DeMar DeRozan, a top high school prospect who currently plays for the Toronto Raptors.

In what has been criticized as a package deal, USC offered both DeRozan and Miller basketball scholarships. The Wall Street Journal reported that the conversation between Miller and USC coach Tim Floyd went as follows:

“Percy Miller said, ‘DeMar and Romeo are ready to make their decision, and would you like to have them both on scholarship?’ remembers Mr. Floyd. “I said absolutely.”

Miller logged only 19 total minutes as a Trojan, scoring five points. But he did lead the Pac-10 in taunts from opposing fans.

More than anything he did on the court, I will remember Miller for his compelling description of DeRozan’s love life in our November 2009 interview:

“We have a lot of stories,” Miller said. “[DeRozan] is kind of shy around girls. You wouldn’t think that a top NBA player would be shy around girls, but he is. Me being Romeo, it came naturally, but he was shy. That is why he is such an amazing player. He put basketball first.”

DeRozan would not argue against Miller’s claim.

“[Of course Miller] should be better [with women],” DeRozan said. “He was a No. 1 recording rapper at one point. But I think I got around so I am not worried about it.”

Realizing his future was not in basketball, Miller left USC before his junior season to return to his entertainment career. He has since competed on Dancing with the Stars and appeared in movies such as Madea’s Witness Protection.

So why is Miller advertising for ICDC, a school that gives “you the tools, knowledge, and technical proficiency that will qualify you for employment in entry-level positions upon graduation?”

As Miller would say, it is all about the “Wall Street Money”