Much has been made about the Trojans competing in the NBA. Nikola Vucevic is fifth in the NBA in rebounding, and DeMar DeRozan is averaging 17.8 points per game for the Toronto Raptors.

USC alumni have also been enjoying success in the NBA Development League.

Smilin’ Gabe Pruitt is playing for the Maine Red Claws. He is averaging 6.3 points and 2.2 assists per game. 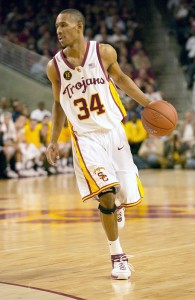 Desmon Farmer is competing for the Reno Bighorns. He is contributing 10.9 points and 2.7 rebounds per game.

Other familiar names from Pac-12 schools competing in the D-League (with ppg in parentheses):

Stats as of March 9. Thanks to Los Angeles Lakers media content intern Trevor Wong for the story suggestion.